Lost Trail: Nine Days Alone in the Wilderness
by Donn Fendler with Lynn Plourde
illustrated by Ben Bishop
Downeast Books, 2011
ISBN: 9780892729456
The reviewer purchased a copy of this book at an independent book store.

Here's the story: A twelve year-old boy from Rye, New York is stranded on Mount Katahadin, Maine's highest mountain, for nine days in 1939. He's alone and has no supplies, yet he miraculously lives to tell his story. It sounds like a work of fiction, yet it's all true. 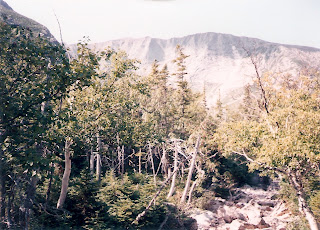 For decades school children across the state of Maine have learned about Donn Fendler's harrowing tale of survival as they read Lost on a Mountain in Maine by Joseph Egan & Don Fendler. It's the kind of story that grips readers right up until the end. Children's book author, Lynn Plourde, and Donn Fendler have collaborated to create Lost Trail: Nine Days Alone in the Wilderness, a new nonfiction graphic novel based on Donn's experiences. The graphic novel format which is ideal for conveying the emotions and adventure of Donn's story.

Lost Trail begins before the hiking trip to Mount Katahdin as twelve year-old Donn, his father, brothers and cousins pack up the family car and head out to Baxter State Park for a weekend of camping, fishing and hiking. Being from New York, Donn is not as familiar with the Maine outdoors as his cousins.Yet, Donn is excited about the camping trip.

Bishop's black and white illustrations bring the story to life.  Bishop skillfully illustrates the land and animals of Baxter State Park. The drawings of wind, sleet and expression on Donn's face depict the severity of the storm on the mountain that scared Donn and made him decide to leave his cousin Henry to go in search of his father. That decision would prove to be Donn's biggest mistake.

Plourde spent a great deal of time talking with Donn about his memories from 1939, and she uses her gift of storytelling and Donn's own words to piece together an exciting tale. During the nine days, Donn injured his toe, was plagued by black flies, fought off hunger, and encountered a black bear. Readers gain a sense of the loneliness Donn faced in the wilderness through the text and illustrations. Newspaper clippings from The Bangor Daily News are interspersed effectively throughout the story to provide readers with a window into the rescue efforts and how Donn's family and the outside world reacted to the tragedy.

The story doesn't end with the rescue; it goes on to describe what happened to Donn after his ordeal (parades, a book, and a visit to the White House). The final panel of the books shows Donn as an adult sitting in a chair on his porch offering advice to readers:
"Trust in yourself, hold onto hope, and believe even if there's no sane reason to believe. And you'll be a better person because you did. I know I am."

Lost Trail will capture the attention of middle grade readers and it's sure to engage reluctant readers. It would make an excellent addition to juvenile graphic novel collections.


Lynn Plourde, Donn Fendler and Ben Bishop discuss The Lost Trail on WCSH 6.
From You Tube: Footage of Donn Fendler's rescue and reunion with his family.
Posted by nonfictiondetectives at 7:16 AM