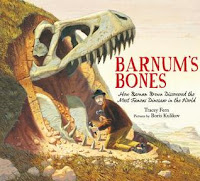 When you think of dinosaurs, the T. rex skeleton on display at the American Museum of Natural History may come to mind. It's become the poster child for prehistoric life. Remember the film scene of the dino playing fetch in Night at the Museum? Thanks to Barnum Brown, museum patrons and scientists can view complete T. rex skeleton and hundreds of other fossils.

Barnum Brown (named after P.T. Barnum) grew up in Kansas in the late 1800s. He loved to dig for fossils of plants and shells on his parents' farm. Brown studied paleontology at the University of Kansas and found that he had a knack for locating fossils while dressed in his signature suit, tie, and bowler hat. When Professor Osborn from the American Museum of Natural History in Manhattan got word of Brown's success, he hired Brown to be the museum's first fossil hunter. The museum didn't have any dinosaur fossils, and the Professor was eager to start a collection.

Brown was in his element traveling around the globe, reading about geology, and digging for fossils while looking dapper. While on a dig in the Badlands in 1902, Brown made his famous discovery. He unearthed a new species of dinosaur, which Professor Osborn named Tyrannosaurus rex. It took years, but Brown eventually located all of the bones to assemble a complete skeleton. He went on to uncover many fossils for the museum, making the American Museum of Natural History's dinosaur exhibit the largest in the world in 1963.

In addition to a nonfiction texts, Tracy Fern used letters and journal entries from the American Museum of Natural History to piece together Brown's life.  Readers will find the narrative style engaging, and the whimsical illustrations bring a light-hearted feeling to the story. Barnum's Bones is sure to inspire young dino enthusiasts, and it would make an exciting read aloud in an elementary classroom. Be sure to read the author's note. There's some interesting information about Brown's work as a spy for the U.S. government. Pair this book with How the Dinosaur Got to the Museum?


YouTube video of the T. rex exhibit at the American Museum of Natural History