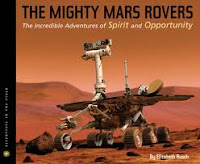 The Mighty Mars Rovers: the incredible adventures of Spirit and Opportunity
(Scientists in the Field)
By Elizabeth Rusch
Houghton Mifflin. 2012.
ISBN: 9780547478814
Grades 4 and up
I checked out a copy of this book from my local public library.

While everyone is caught up in Olympic fever, Curiosity, NASA’s Mars Rover, is quietly making its way to the red planet. The super-sized rover, Curiosity, is scheduled to land on Mars on August 6 at 1:31 a.m. EDT (0531 GMT). This is not the first time NASA has sent a robot to Mars with the purpose of assessing conditions for life. The Mighty Mars Rovers: the Incredible Adventures of Spirit and Opportunity by Elizabeth Rusch, another entry in the acclaimed Scientists in the Field series, tells the greatest robot adventure of all times through the eyes of Steven Squyres, lead scientist on the mission.

On June 10, 2003, NASA sent a go cart size robot named Spirit to Mars. Less than a month later, on July 7, 2003, its twin, Opportunity, also was blasted into space. Scientists thought these robots would only survive for three months in the hostile conditions found on Mars. Frigid winters, dust storms, and blazing hot summers, yet Spirit and Opportunity, exploring halfway across the planet from each other, amazed their creators. These little dynamos surpassed all expectations to last six years. Six Years! Together, the little machines explored 25 miles (44 km) of Mars’s surface and took more than a quarter of a million photos including 360-degree views of hills, plains, and craters.

As with all the books in this series, you can depend on exciting prose, wonderful color photographs, and understandable details about the topic. The books are well documented with sources, chapter notes, further reading, a glossary, and index.

The Mighty Mars Rover is an excellent book that will give children a backstory on the development of these amazing robots and their importance in discovering if life exists on other planets. The book is timely, especially since the landing of the newest Mars Rover, Curiosity is just a few days away. (You can track Curiosity's progress by visiting the official NASA web site)