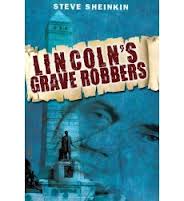 Lincoln's Grave Robbers
Steve Sheinkin
Scholastic. 2013
ISBN: 9780545405720
Grades 5 and up
An uncorrected proof provided by the publisher was used for this review.

Why did a few cony men, those who deal in counterfeit money, decide to steal Lincoln’s body?

In Lincoln's Grave Robbers, we learn that the idea to run off with our 16th president’s body was to get Benjamin Boyd, one of the nation's top engrave of counterfeit plates, out of jail.  He had been arrested on October 20, 1875. Money made from Boyd’s plates were so close to the real thing that it was extremely difficult to identify, so without Boyd’s talent, counterfeiter’s were no longer on easy street.

Desperate to get him out of jail was James “Big Jim” Kennally, boss of counterfeiting around Chicago. Kennally's plan was to steal Lincoln’s body from his tomb in Springfield,IL and hold it as ransom until Boyd was released from prison and he got $200,000 in cash. Kennally and his gang decided that to stage the event on election night, November 7, 1876. This particular election, between Rutherford B. Hayes and Samuel J. Tilden, would go down in history as the most contentious election in American history. (that is until 2000.) Who would notice a trio of strangers in Springfield amidst all those who were there to vote. The Lincoln Monument would be deserted -- everyone would be in town, voting and then waiting for election results to come into the newspaper offices by telegraph. And later that night, as they sped off with Lincoln's casket, the roads would be conveniently busy. "A wagon going along the roads would not be noticed," Swegles later explained, "since those who saw it would think it contained farmers going home from the polls."


The theft almost worked, but for Lewis C. Swegles, a career criminal turned snitch, “a roper”, who kept the Secret Service informed of every detail. If not for Swegles, the plot would not have been intercepted nor the criminals caught and brought to justice.

Steve Sheinkin once again digs back into our history to uncover a fascinating story and pulls it all together in a page turner reminiscent of the hard-boiled detective stories of the 1920’s. We learn how Secret Service agents conducted their sting operation without the use of today’s high-tech tools, just good old-fashioned police know-how.

The addition of historic photos, all well-captioned, adds depth to this exciting event. As with other books by Sheinkin (The Notorious Benedict Arnold & Bomb), once I begin reading I can't stop until the end. He writes so well. The one difference I did feel with Lincoln's Grave Robbers was the narrative slowed a bit as Sheinkin tried to cover additional topics -- counterfeiting, stealing bodies for medical research, the formation of the secret service, and the reburial of Lincoln’s body in Springfield. These were important to the overall narrative, but it did feel as if he was getting off topic for a few pages, then he'd go back to the main topic and things would pick up. I bet he would be an entertaining speaker. Readers will be glad to have the listing of all the names mentioned in the text. That helped me keep track of the who was a good guy and who was not. In addition, included are a glossary of phrases (shover, pipe, boodle game, and hack), plus source notes, an index, and a Body Snatcher Bonus Section.

Display Lincoln’s Grave Robbers with Candace Fleming’s, The Lincolns: a scrapbook look at Abraham and Mary, Chasing Lincoln’s Killer by James L. Swanson, Abraham Lincoln and Frederick Douglass: the story behind the friendship by Russell Freedman, Second Sight by Gary Blackwood, Assassin by Anna Myers, An Acquaintance with Darkness by Ann Rinaldi.

For a virtual tour of Lincoln's tomb, go here.
Posted by Louise at 8:00 AM