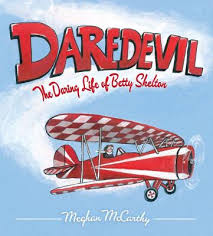 Daredevil: the Daring Life of Betty Skelton
Written and illustrated by Meghan McCarthy
Simon & Schuster (A Paula Wiseman Book). 2013
ISBN: 9781442422629
PreK - Grade 5
To pen this review, I borrowed the book from my local public library.

In 1930, when other girls are content to play with dolls, Betty June Skelton played with her metal plane.

And so begins this engaging picture book biography about a woman who dared to dream high and became the first lady of firsts.

Betty June grew up in Pensacola, Florida when airplanes were still new. She lived near a giant navy base, so on Sundays her parents drove her to the base to see the navy planes up close. Precocious and persistent, Betty June received her pilot license at age sixteen. She even made the newspapers.

McCarthy’s illustrations, done in acrylics, have personality and reflect Skelton’s determination, along with a sense of humor and passion. Readers will feel as if they have opened Betty June’s scrap book, seeing all her incredible accomplishments. In 1951, Betty June  reached a record height of 29,050 feet, which is higher than the top of Mount Everest. The temperature outside was fifty-three below zero! Because she always flew barefoot, after the flight the daredevil record breaker said, “My feet darn near froze to death.”

To learn more about Betty Skelton, visit the author's web page. You can watch a short film of Betty flying a stunt plane or listen to an interview recorded in 1999.
Posted by Louise at 5:00 AM