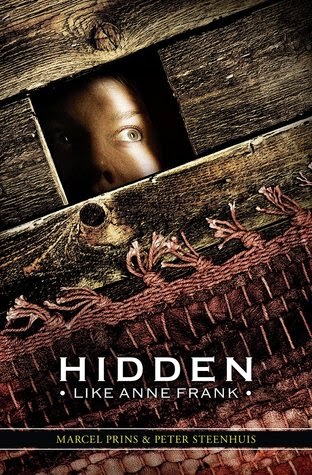 by Marcel Prins and Peter Henk Steenhuis; translated by Laura Watkinson
An Arthur A. Levine Book; Scholastic. 2014
ISBN: 9789545543620
Grades 7 thru 12
To review this book, I checked a copy out from my local public library

Anne Frank recorded in her diary the two years the Frank family spent in hiding during World War II. Though Anne’s story is the most well known, Prins, an award-winning documentary filmmaker and cameraman, and journalist Peter Henk Steenhuis, give us 14 individuals, also from the Netherlands, and share their experience going into hiding. Some children were as young as three or four; some teenagers. About 28,000 Jews were hidden in the Netherlands. “Roughly 16,000 survived and 12,000 were caught or betrayed.

As a boy growing up in the Netherlands, Marcel Prins was curious about his mother’s experience of going into hiding during World War II. She would tell Marcel about the exciting parts, and the times when she had been scared or sad. Her story (the first in this collection) would make an impression on Marcel. He wondered what going into hiding actually involved. Where did you go? How did you know who to trust? How did you find money to pay for your hiding place? What did you do when you were frightened?

In these 14 true stories, written in first-person by the individuals, readers gain a first-hand account of what it was really like for many Jewish children who went into hiding during World War II. Some lived with people they knew; others lived with complete strangers. There were those who were treated with love and kindness; while others were beaten. Told in first person, each story is in the voice of the individual as they reach back over fifty years into their memories to share their painful experience.

At the beginning of each entry a map shows the places in the Netherlands where that person went into hiding. Black & white photographs of the individuals and their families before they went into hiding, places where they were living while in hiding, and of scenes from that time. Back matter has photos of each survivor as an adult and glossary of words or names that may be unfamiliar to readers.

Hidden Like Anne Frank is powerful because each heartbreaking entry recounts this traumatic period from the survivor’s childhood. The website that accompanies this book includes one or more animated films that illustrate the memories of the survivors.