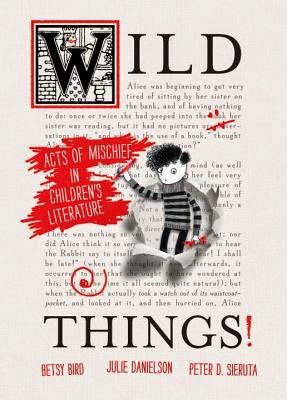 The reviewers received a galley from the publisher.

We are excited to take part in the Wild Things blog tour. Today you are in for a real treat;  we have a guest post from authors Betsy Bird and Julie Danielson.

Bird, Danielson and Sieruta spent several years researching subversive, controversial and scandalous stories from children's literature. Part history and part social commentary, Wild Things is a must-read for educators, librarians, authors and parents with a passion for kidlit. These provocative anecdotes will cause readers to pause and reflect on the role of children's literature in our society and how it has evolved over the decades.

If you’re going to write a book about the wilder side of children’s literature, it’s fitting to open it with a chapter on subversive books. That’s what we thought anyway, and that is precisely what we did in Wild Things! Acts of Mischief in Children’s Literature. We three authors are huge fans of more subversive tales in all forms – that is, all the way from board books to YA novels.

While most subversive elements in the world of children's literature are intentional, sometimes there are cases where readers simply read far too much into a tale. One such example is The Story of Ferdinand, published in 1936 and still a beloved picture book today. Written by Munro Leaf, illustrated by Robert Lawson, and met with wide acclaim upon its publication, it’s the story of a bull in Spain who enjoys spending his days quietly and who chooses not to fight at the bull fights in Madrid. He’s eventually taken there against his will, so his response is to sit down in the middle of the ring to admire the “flowers in all the lovely ladies’ hair.” He simply refuses to engage, and as a result the Banderilleros, Picadores, and Matador take him back to his pasture.

Poor Ferdinand. He was merely waving a peace sign, yet as the book grew in popularity, critics claimed that perhaps the beloved tale of the Spanish bull was no less than commentary on the Spanish Civil War. In time the book was accused of being communist and fascist and was even banned in some countries.

Author Munro Leaf’s response to the controversy was to note that no political machinations were involved, and he went on to state precisely why he wrote this particular story. But then we can’t give away all of our book’s secrets.

And even if Leaf didn’t intend for the book to represent opinions that swirl around in the world of adults, children’s literature has a tendency to accompany---and sometimes precede---great social changes, another phenomenon we explore in the pages of our book.

And what other picture books have comfortably settled themselves into the canon of subversive children’s book titles, whether they meant to or not? You can find out when Wild Things hits shelves in early August.


Be sure to visit the other stops on the Wild Things blog tour this month.

August 14th  Wendy on the Web

August 18th  Into the Wardrobe

Posted by nonfictiondetectives at 2:00 AM