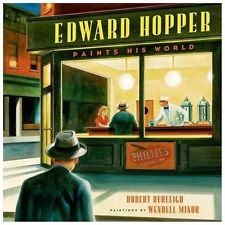 Edward Hopper Paints His World
By Robert Burleigh; Paintings by Wendell Minor
Christy Ottaviano Books: Henry Holt and Company. 2014
ISBN: 780805087529
Grades 2-12
To write this review, I checked this book out of my local public library.

Little Edward Hopper had many dreams.
But one dream was biggest of all—he was going to be a painter when he grew up.

In Edward Hopper Paints His World, Burleigh & Minor offer a beautiful tribute to Edward Hopper, one of America's most important painters. The marriage between text and illustrations is dazzling.

Edward Hopper was born July 22, 1882 in Nyack, New York. Hopper never gave up on his dream to be an artist. He drew all the time and after studying in New York and Paris, Hopper worked as an illustrator for magazines. Though his magazine illustrations won him prizes, he longed to paint what he wanted, not what others told him to draw. Even after success, he continued to paint what he saw: lighthouses, old houses, cityscapes, lonely roads, and deserted buildings.

Back matter includes an author’s note, Hopper quotes on art, reproductions of four of Hopper paintings, important dates in the life of Edward Hopper, author’s references, artist’s sources, and websites.

In my opinion, introducing children to the lives and works of great artists is important, not only for their development and to stimulate creativity and problem solving, but because being exposed to art is as essential as…breathing.

Besides the obvious use of Edward Hopper Paints His World in an art class, pair it with other picture book biographies of artists. For intermediate, middle and high schoolers, first read Framed by Frank Cottrell Boyce. One of my all-time favorites, Framed is the perfect book to emphasize how one can see life from a new angle after being introduced to great art.