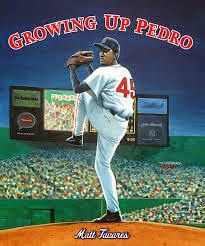 Red Sox fan and author/illustrator, Matt Tavares, has released a new baseball biography just in time for opening day. Growing Up Pedro follows the rise of pitcher, Pedro Martinez, from a childhood of poverty in the Dominican Republic to success as a Major League pitcher. Young readers are sure to find inspiration in Martinez's story.

Tavares organizes the sparse text into stanzas, like poetry. Martinez received support and guidance from his older Ramon as he navigated his way through the baseball system. Themes of persistence and remaining focused on your goals shine through as Martinez worked hard to hone his skills. He succeeded as a pitcher despite coaches telling him he was too small to play in the Major League.

"Every time he takes the mound,
he reminds everyone who doubted him.
with every pitch, he tries to prove them wrong."

Gorgeous, full-page, watercolor, gouache and pencil illustrations compliment the narrative.  In a close-up illustration, Tavares captures the intense focus on Martinez's face as he pitches in a major league game. That focus and determination paid off when he led the Boston Red Sox to a World Series victory in 2004.

Growing Up Pedro is a recommended purchase for school and public libraries, and it would make an excellent gift for young sports fans of all ages. Be sure to read the author's note to learn more about how Martinez used his major league earnings to give back to his hometown in the Dominican Republic. Readers will also learn that Tavares traveled to the Dominican Republic and conducted interviews to research the book. Pair Growing Up Pedro with Henry Aaron's Dream and There Goes Ted Williams by Matt Tavares.

Visit Matt Tavares' site to see illustrations from the book and to access a guide for educators.