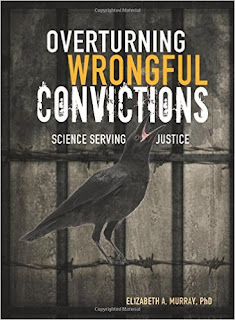 This is a Cybils book. The opinion expressed in this review is mine, not the committee's.

Being wrongfully convicted of a crime you didn’t commit and spending years behind bars is a frightening thought. How can such injustices happen? In Overturning Wrongful Convictions, Elizabeth Murray, a forensic scientist, explains that the very sciences that put people behind bars can also set them free.

Each chapter explains just how the system can break down and where mistakes have been made. From mistaken eyewitness identification, police misconduct, faulty forensic science, poor legal representation, courtroom mistakes, and other factors that can result in the wrong person serving someone else’s time.

Because of her experience as a forensic scientist, Murray’s narrative weaves real-life stories of prisoners and the process taken to prove their innocents with explanations on the different sciences used to convict or exonerate prisoners. Take Kenny Waters. In May of 1980 Waters was accused of murdering his neighbor, Katharina Reitz Brow. Though convicted because blood matching his type was found at the crime scene, eighteen years later and the improvements in DNA testing, Brow would be exonerated. (though he would die six months after his release from an accidental fall).
Since 1989 more than 1,400 Americans who were wrongfully accused have been exonerated by using the same sciences that convicted them. One organization, The Innocence Project was founded in 1992 with the sole purpose of exculpate those falsely convicted. The organization receives more than three thousand requests each year, but can only accept a small number of inquiries because of the amount of time involved - from one to ten years.

Full-page and half-page color photographs, side bars, and accompany the text. The extensive back matter includes  exoneration profiles of those stories mentioned in the book, source notes, selected bibliography, three pages of suggestions for further reading, and an index. I particularly found the narrative interesting, even with all the scientific information, Murray excelled at making the information accessible. We learn that exoneration is achieved, mostly through DNA testing and fingerprints.

Overturning Wrongful Convictions: science serving justice is a recommended purchase for high school and public libraries where forensic science is of interest or there are fans of the TV show, NCIS.  How fitting to have a Raven on the book's cover for they are often referred to as harbinger of powerful secrets.