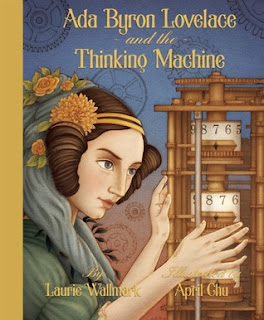 This week is Computer Science in Education Week. Thousands of students across the country will take part in the Hour of Code and learn about computer programming.  Last year I assembled a display of books in my school library to promote Computer Science in Education Week, and I quickly realized there was a huge gap. Where were the books about women? We have books about Steve Jobs, Steve Wolzniak, Bill Gates, Mark Zuckerberg and other men in tech. What about the women in computer science? What about Ada Lovelace, Grace Hopper and Jean Bartik? Creston Books has recently published a biography to help fill the niche.

Laurie Wallmark and April Chu collaborated on Ada Byron Lovelace and the Thinking Machine, a new picture book biography about the woman who wrote the first computer code. Lovelace was the daughter of the poet Lord Byron, and she had an affinity for mathematics at a young age. Although it was the 1800s, her mother encouraged Ada to pursue math and science and hired a tutor to help Ada further her studies. The accessible narrative text highlights how Lovelace met mathematician and inventor, Charles Babbage, and collaborated with him on an Analytical Engine or "Thinking Machine" that would solve complex math problems.  Young readers will be intrigued by Lovelace's work on the Thinking Machine;  she wrote the algorithm for the machine and created the first computer program.

Chu's pencil illustrations use muted colors to bring a 17th century feeling to the story.  Back matter includes an author's note, timeline, and a bibliography. The story of Ada Lovelace serves as an inspiration to children and is the perfect book to read aloud during Computer Science in Education Week. I'm excited to share the book with children in my school, and it will have a prominent place in this year's library display. Next we need a biography of Grace Hopper.

Visit the illustrator's site to view artwork from the book.