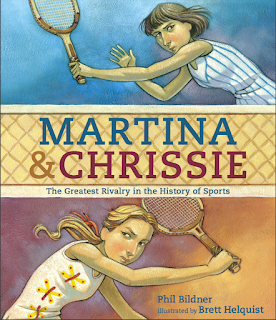 Martina & Chrissie: the Greatest Rivalry in the History of Sports
by Phil Bildner; Illustrated by Brett Helquist
Candlewick. 2017
ISBN: 9780763673086
Grades 2-5
To review this book, I received a copy from the publisher

“Hey, guys —
yeah, I’m talking to you.
You see those two names on the cover?
Martina and Chrissie?
That’s Martina Navratilova and Chris Evert.
You know who they are, right? No?
NO?!
Wow, okay.”

And so begins this exciting informational picture book, a duel biography, of how two women of equal talent, tennis stars from the mid-1970’s till 1990, though they did play against each other refused to be rivals. Instead…they remained friends.

Bildner’s casual tone conveys great excitement as he explains to readers how Chris Evert, from Fort Lauderdale, Florida and Martina Navratilova, from Revnice, Czechoslovakia “were the greatest rivals in the history of sports. ALL SPORTS.”

Chrissie was all technique. She was poised, had precision and was in great shape. Martina, had a lefty serve, loved to rush the net and at first was very out of shape. Where Chrissie was calm, Martina was all emotion. They became friends and enjoyed competing against each other. "After awhile, Martina got tired of all that losing." She got a new coach and got in shape. She started winning. Martina's new coach didn't allow her players to be friends with their rivals. Coach wanted her players to "hate their opponents. Like enemies."

Bildner plays off the rivalry between Chrissie and Martina with the conflict going on between the US and Russia at that time. The Cold War.

Helquist’s illustrations, rendered in acrylic and oil on paper, artfully filling every inch of the pages. Evert & Navratilova, fierce and determined while on the court, are seen smiling when hanging out as friends.

Sure, if you go by the numbers, then yes, Martina had more wins. But, that’s not the story Bildner wants to tell. Nope. The story is this: these two tennis stars were great because they were friends and helped each other be the best they could be.  “Because they played together, they became the best, equal parts of the greatest rivalry in the history of sports.”

Back matter includes a timeline with more facts about Chrissie and Martina’s games. Sources include books, articles, some audiovisual materials, and websites.

Just in time for Women’s History Month, this is a great book to share with all students.