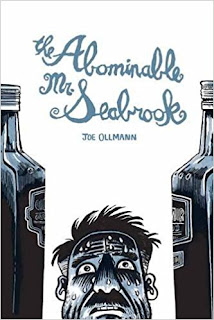 Note: While Cathy is on Sabbatical, Louise is writing all the reviews until she returns February, 2018.

I was on the fence about calling The Abominable Mr. Seabrook nonfiction. Why? Because the author used dialogue to move the story forward. Yet, this book is so well-written, engaging, and meticulously researched, the author having spent 10 years studying Seabrook, that in the end I say it is a biography told in graphic format.

Ollmann states in the introduction, “I knew at the beginning that I wanted to do a linear biography and to put as little of my own editorial bias into it as possible, whatever the results. Some times a life doesn’t follow a neat narrative arc or fulfill the requirements of a biographer’s thesis.

Who was Mr. Seabrook? William Bueller Seabrook (1884-1945) was an early 20th-century journalist known for his travel writings. He was friends with Aldous Huxley, Gertrude Stein, Theodore Dreiser, Man Ray, Salvador Dali, and others.

Seabrook wrote ten books. Ollman claims, “Seabrook was a progenitor of gonzo journalism.” (think Hunter S. Thompson). His first book, Adventures in Arabia, published in 1927. is about Seabrook’s adventures living for two years in Lebanon, Iraq, Syria, and Jordan. He offers readers an insiders view of Bedouin life during the 1920’s. In 1929, his second book, The Magic Island, is a study of the people of Haiti and the practice of Voodoo. It is believed that Seabrook was the first to popularize the word Zombie.

I could go on and on, but suffice it to say that from the first page this biography captured my attention. Seabrook’s life was so interesting. He was married three times, was insecure about his writing, often ran from commitments or from his life if felt too comfortable. He was also an alcoholic who, unable to remain sober and quell his demons, committed suicide September 20, 1945. He was sixty-one. Ollmann’s illustrations use a limited palette of black and gray. The standard nine-panel grid format allows him to pack a lot of details about Seabrook’s life in 300 pages. Ollmann portrays Seabrook a bit unkempt and scratchy, which once you get to know him, fits his personality to a T.

The creepy thing about Seabrook is that he had a passion for sadomasochism (S&M). There are glimpses of women hanging from the rafters or bound, naked, on the floor, but they are not the centerpiece of this story, more accidental, in the background, as if we’ve accidentally walked into a room without knocking. (Ollmann states in his notes that the first woman willing collaborating in his bondage fantasies worked for Tony Sarg, the designer of the balloons in th first Macy’s Day Thanksgiving Parade).

I highly recommend The Abominable Mr. Seabrook to lovers of the graphic biography, for those who enjoy reading about the quirky, imperfect individual, and biographies about people who have all but been forgotten.

Back matter includes author’s note, a bibliography, and Ollmann’s brief reviews of all ten of Seabrook’s books. To support his added dialogue or when using direct  quotes, Ollmann also includes his notes, giving page number and specific panel (page 15, panel 7)  of where he got his information.

I will note here that I am a huge fan of the publisher, Drawn & Quarterly. They publish really top-notch books in the graphic format.

Posted by nonfictiondetectives at 7:00 AM