Survivors Club: The True Story of a Very Young Prisoner of Auschwitz by Michael Bornstein and Debbie Bornstein Holinstat 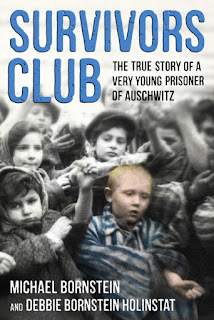 Survivors Club: The True Story of a Very Young Prisoner of Auschwitz
by Michael Bornstein and Debbie Bornstein Holinstat
Farrar Straus Girous. 2017
ISBN: 97800374305710
Grades 7 and up

“In 1945, in a now famous piece of archival footage from the Holocaust, four-year-old Michael Bornstein was filmed by Soviet soldiers being carried out of Auschwitz in his grandmother’s arms.”

Bornstein explains, “For a very long time, I did not talk about what happened to me during the war.  But then, one day, he was searching online and came upon a website that claimed the Holocaust was a lie. His photo, the one that is on the cover of this book, was being used to manipulate history by claiming that the Jews had lied when they said their young were killed on arrival in Auschwitz.

“I slammed my computer shut in disgust. I was horrified.”  But it helped Mr. Bornstein find his voice. “It made me realize that if we survivors remain silent, then the only voice left to hear will be those of liars and bigots.”

The book is written in collaboration with his daughter, Debbie Bornstein Holinstat, a producer for NBC and MSNBC. Survivors Club tells the important story of what happened to Michael and his family before, during, and after the German invasion of Poland after 1939. The Bornstein’s used interviews with relatives, survivors who knew the family, primary sources, and Michael’s own recollections to recount one family’s inspirational story of survival.

To hear more about the book, watch this movie.

Click here to learn more about Michael Bernstein and his book, Survivors Club.

An important addition to books on the Holocaust. Give this to students who ask for Diary of Anne Frank, Hanna’s Suitcase, and Maus I & II.

In this growing climate of hate, Survivors Club is a story we must never forget.


To write this review, I used an ARC and a final copy, both books supplied by the publisher.
Posted by nonfictiondetectives at 6:00 AM