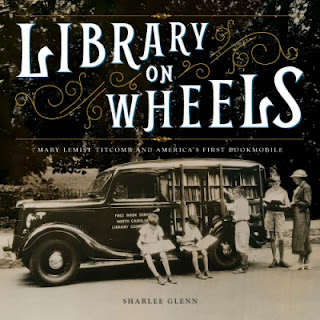 Glenn has written a loving homage to librarians, those dedicated individuals who work hard to guarentee that people in their communities have easy access to materials and services. Mary Lemist Titcomb was such a librarian. Born in 1852, Titcomb, in 1914, served as the second vice president of ALA. It was while working as the director of the Washington County Free Library in Hagerstown, Maryland, that Titcomb made her mark. Titcomb knew that over half of the residents, 25,00 people, lived on farms and were not able to get in to the library. “Miss Titcomb was determined that everyone should have access to the library, not just adults, not just the rich or educated, not just those who lived in town.”

How did she manage this?
Yet, Titcomb felt there were still some residents the library was not serving. How to reach them? She came up with the idea of using a horse-drawn “book wagon.” The first book wagon, pulled by two horses, Black Beauty and Dandy, made its maiden voyage in 1905.  It was an immediate success. By 1922, bookmobiles began appearing up in other parts of the country.

Readers learn how Titcomb overcame the prejudices of her time. People told her she couldn’t do this or that. Why? Because she was either too young or a girl. “But Mary never gave up.”

Supporting Glenn's engaging narrative are many historic photos, some copies of letters and an article about Titcomb. The photos enhance what is being explained in the text.

Back matter includes an author’s note, source notes, bibliography of materials used for research, and index.

How did Glenn come up with the idea to write about a little known librarian? Glenn explains in her author’s note, "I was doing research for another book when I ran across an obscure reference to a woman named Mary Lemist Titcomb who was credited with the invention of the bookmobile in America. A woman had invented the bookmobile! I was immediately intrigued.”

Share this book with children, and adults. When I booktalk Library on Wheels is gives me another opportunity to share that a librarians job is more than sitting around reading all day.

In addition...I loved the book because I have always wanted to work on a bookmobile.

To write this review, I borrowed a copy of this book from my local public library.
Posted by Louise at 7:17 AM