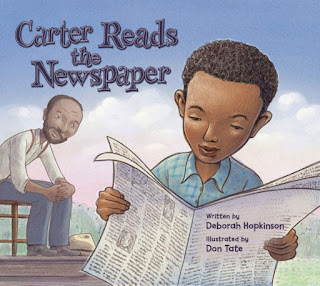 Carter Reads the Newspaper
Written by Deborah Hopkinson; Illustrated by Don Tate
Peachtree. 2018
Grades 2 and up

“Carter G. Woodson didn’t help people escape from slavery, start a bus strike, or lead a movement of millions. Yet without him, we might not have Black History Month. This is his story.”

In this picture book biography, Hopkinson tells the inspiring story of Carter G. Woodson, the man who has been cited as “the father of Black History Month.”

Carter G. Woodson was born in 1875 in Virginia. His parents had been born into slavery and they shared their stories with Carter. Growing up, he didn’t have much schooling, but he did learn to read. His father believed in being an informed citizen, so though he himself was unable to read and write, he had Carter read him the newspaper. “Reading the newspaper gave Carter his first glimpse of the wider world.”

The seed of wanting to learn more about the legacy of his people was deepened while working in the coal mines for three years. While attending Harvard, after a white professor claimed, “Black people had no history” that Carter took up the challenge to prove that professor wrong.

Hopkinson shows that one person can change history.

Back matter includes an author and illustrator’s note, a list of Black leaders pictured throughout the book, a timeline of Carter G. Woodson’s life, and source notes for quotes.

A perfect book to share when kicking off Black History Month.