Rocket To The Moon by Don Brown 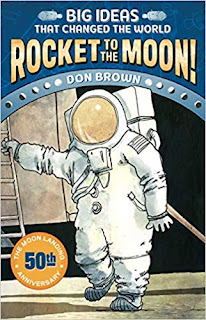 In Rocket To The Moon, Brown focuses on the people and inventions that would eventually lead to the landing of Apollo 11 on the moon in 1969.

Though the Chinese invented gunpowder in the first century, it was not until the fifteenth century that the English and French began using rockets as weapons and fireworks. The rockets the British launched at Fort McHenry during the War of 1812, inspired Francis Scott Key to write the Star-Spangled Banner. “And the rocket’s red glare…”

“Then the ideas dried up, and nothing much happened with rockets until the beginning of the twentieth century, when three honest-to-goodness rocket scientists showed up: Russian Konstantin Tsiolkovsky, American Robert Goddard, and Romanian Hermann Oberth.”

What inspired all three? The book by French novelist Jules Verne, From the Earth to the Moon and a Trip Around It. Published in 1865, the science fiction tale was all about traveling through outer space. This book would change the lives of all three men.

Brown incorporates lots of fascinating details, such as how the astronauts went to the bathroom in space. In his author's note, he explains that the development of the rocket and its usage was mostly in the hands of white men. Katherine Johnson, a mathematician working for NASA, is mentioned. Brown also acknowledges that today NASA is made up of a diverse group of people.

Back matter includes a timeline, source notes for the quotes used throughout the story, an extensive bibliography of books, magazines, television, movie and website resources. An author’s note, brief bio of Rodman Law (his sister was Ruth Law, the famous record-setting flyer), and index.

This is a fascinating, well done addition to books on the race to the moon.

To write this review, I borrowed a copy of the book from my local public library.
Posted by Louise at 5:00 AM