The Brave Cyclist: the True Story of a Holocaust Hero by Amalia Hoffman 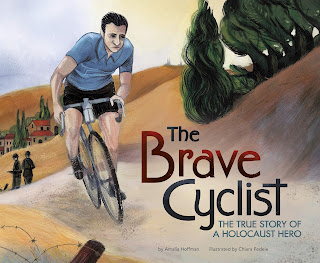 The Brave Cyclist: the True Story of a Holocaust Hero
by Amalia Hoffman; Illustrated by Chiara Fedele
Capstone Editions. 2019
Grades 4 and up

In Hoffman’s picture book biography, she tells the true story of the brave Italian cyclist, Gino Giovanni Bartali (1914-2000). A sickly child, Bartali would go on to win the Tour de France in 1938. Not a supporter of Il Duce (Benito Mussolini), Bartali was asked to use his cycling skills by transporting photographs and fake identification cards to save Jews who lived in Italy during World War II.

This inspiring story of courage shows that one person really can make a difference. Bartali’s legend lives on in Italy. Among other recognition, in 2009, an annual cycling journey was established in Italy, called cycle pelegrinaggio. The journey retraces part of Bartali’s smuggling route between Florence and Assisi.

To write this review, I received a copy of the book from the publisher.
Posted by Louise at 5:00 AM