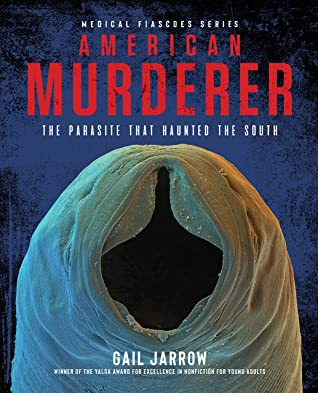 American Murderer: The Parasite That Haunted the South
by Gail Jarrow
Calkins Creek, 2022
Gades 6 and up
On shelves Sept. 27, 2022

American Murderer is the highly anticipated third book in Gail Jarrow's Medical Fiasco series.  Jarrow is known for writing about medical conditions and illnesses from an historical perspective. Her latest work focuses on a mystery illness that plagued rural communities in the South at the turn of the 20th century.

Readers will be drawn into the story from the first chapter (entitled "Vampire") as Jarrow describes a "deathly, pale, hunched-over figure" standing on a train platform. A scientists on the train indicates the man is a victim of "America's bloodsucking murderer."

The medical mystery is solved by parasitologist, Charles Wardell Stiles, who studied parasites and hookworms in Europe. Stiles identified the Necator americanus or American Murderer, a bloodsucking parasite that attaches to the intestines and cause anemia. pica and malnourishment. While Stiles traveled through the South sharing a cure for hookworm, Arthur Loos was determined to figure out how Americans are getting infected with the parasite. This leads to the story to another medical mystery for scientists to solve.

The engaging narrative grounded in mystery will keep readers turning the pages. Microscopic images of hookworms magnified 700 times (such as the cover image) are terrifying and fascinating. Primary documents such as posters, newspaper articles, cartoons, and photographs are thoughtfully placed throughout the book.

Equal parts science and history, readers will be surprised to learn how doctors, politicians and the public viewed and responded to this common and debilitating illness dubbed the "lazy germ." As government and philanthropic groups were created to study and eradicate hookworm in the South, the book explores issues of class, race, geography, and social status. Jarrow finds connections to present day in the final chapter, "The BloodSucker Lives On."