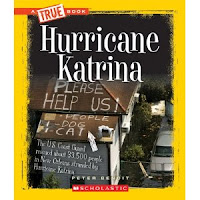 Students frequently come to the library in search of books about tragedies from history, and now True Books is offering a series to meet the needs of those inquisitive young readers. The True Book- Disasters series penned by Peter Benoit covers a range of events such as the earthquake in Haiti, the terrorist attacks of September 11th, the BP oil spill, and nuclear meltdowns in addition to events from our more distant past.

Benoit does not shy away from difficult facts in Hurricane Katrina; the book sheds light on this devastating event from 2005 in a clear and thoughtful manner that is just right for elementary school readers. The book begins with a "Find the Truth!" page that piques the interest of readers by asking them to guess which of two statements is true:
No levees broke in New Orleans.
No future hurricanes will be named Katrina.
Readers are challenged to find the answer by reading the text. There is an answer page in the back of the book.

There are only four chapters in the book: Hurricane Coming, Devastation, The Situation at the Superdome, and Rebuilding New Orleans, making the book accessible to students of varied reading abilities. The chapters are brimming with facts about the storm and its effect on the Gulf Coast, yet the vocabulary and sentence structure are just right for readers in grades 3-5. Readers will be intrigued by the photographs that capture the devastation and impact of the hurricane on the people of New Orleans and its surrounding areas. Many photos are accompanied by interesting facts:

I was impressed that the author did not avoid difficult topics such as the desolate conditions at the Superdome, the government's mishandling of rescue and reliefs efforts, and the violence that erupted amid squalid conditions. Benoit covers each topic in a fair and balanced manner relying on facts and the observations of witnesses.

"Desperate doctors and nurses wondered where help was. Some 80,000 others stranded in the city also wondered when they would be rescued. So did television viewers around the world watching the disaster" (p. 21).

The book ends on a hopeful note with coverage of the rebuilding efforts and highlights of effective programs that build new homes for hurricane victims. The American Library Association is mentioned in the "Tourism Returns" section for holding its Annual Conference in New Orleans in 2006 despite the conditions of the city at the time. A bibliography and list of web sites are included at the end of the book. The web sites provide readers with access to photographs, interviews, and videos related to Hurricane Katrina.

Hurricane Katrina fills a niche in the nonfiction collection of many public and elementary school libraries. There are few books that are able to take a difficult topic that hold some many raw emotions for our citizens and write in a manner that young readers will understand, yet Hurricane Katrina does just that!