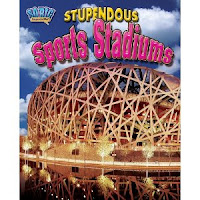 By Michael Sandler
So Big Compared to What? series
Bearport, August 2011
ISBN 9781617723025
Reviewer received book directly from the publisher.

I frequently get asked for books about sports stadiums at the public library. Next time I will happily hand over Stupendous Sports Stadiums.

Nine stadiums located throughout the world are briefly highlighted here with the intention of explaining the unique feature that makes them 'stupendous': Cowboys Stadium in Texas, Beijing National Stadium in China, ANZ Stadium in Australia, Marina Bay Floating Stadium in Singapore, Allianz Arena in Germany, World Games Stadium in Taiwan, University of Phoenix Stadium in Arizona, and Rungrado May Day Stadium in North Korea.

Though I am not a fan of any sport, I was interested to learn that the ‘Stupendous Feature’ at the University of Phoenix Stadium is a fully movable grass field. Apparently, it is easier on the legs of the NFL team to play in real grass, but “growing grass in hard to do beneath a stadium floor.”

“The architects of University of Phoenix Stadium, however, found a way to build a roof and give the Arizona Cardinals football team real grass to play on.  The stadium floor – with the grass field on top – is a movable tray. It can slide right out of the stadium.” Very cool!

I was surprised to learn that most of the time the field sits outside the stadium, soaking up the sunlight. Then on game day, “the tray slides back inside the 13 train-track-like rails and more than 500 wheels.”

For those who love trivia, little bubbles help relate some pretty interesting stuff about the stadiums. For example, ANZ Stadium, located in Sydney, Australia, was built in 1999 for the 2000 Summer Olympic Games. ANZ is one of the most eco-friendly stadiums in the world.
The bubble states:

“ANZ Stadium has about 112 miles (180 km) of electric cable to power signs, video displays, and elevators. Stretched out, this cable would be longer than the distance from New York City to Philadelphia.”  Wow!  For the Cowboys Stadium, the enter and exit doors are “120 feet (37 m) high by 180 feet (55 m) wide – big enough for more than 20 school buses to drive through them at the same time!”

This book includes a table of contents, glossary, index, and bibliography.

Part of the So Big Compared to What? series from Bearport Publishers, this is a good purchase for libraries, both public and school, that need to boost their sports section.

Posted by nonfictiondetectives at 10:51 AM