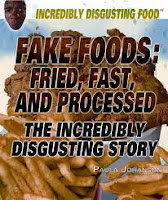 Paula Johanson
Rosen Central. 2011
ISBN: 9781448812691 (Grades 4 and up)
Series: Incredibly Disgusting Food
I checked this book out of my local public library.
Did you know that the "buttery" flavoring used in microwave popcorn is made of artificial ingredients "that cause factory workers to get rashes and lung disease, and even die? Or that the "average soda pop has up to 12 teaspoons of sugar?"

Author Paula Johanson is on a mission. She wants to be sure that children understand that eating fake foods, the stuff that is highly processed, have negative health and environmental consequences.

"Much of the food eaten in North America is fast food, or fried or processed to the point that it is no longer healthy, natural food. Nutritionist Marion Nestle calls it fake food and junk food, low in nutrition and high in salt, fat, sweeteners, and chemical preservatives and additives."

Johanson holds nothing back as she tells the disgusting story of fake food and how it affects our health and its ongoing impact on our environment. The five chapters: Making Fake Foods, How Fake Foods Affect Your Body, Health Changes: Now and Later, Eating Real Food, are packed with a lot of information.

Making Fake Foods, Johanson explains that animals raised for meat consumption live very miserable lives. "On factory farms, pigs are crowded into pens. Their tails are cut off so they don´t bite each other from boredom. Some pigs are kept in small cages all their lives." The same goes for chickens. "Chickens raised for meat grow so quickly that their legs often become crippled from trying to hold up their big meaty chests."  The food that those animals consume is also pretty disgusting. Their food grain "is mixed with chopped animal guts and dried blood from slaughterhouses."

In How Fake Foods Affect Your Body we learn that "Eating fake foods has negative effects on people´s bodies, making it difficult to build strong muscles or get better for a head cold because the fake foods often lack vitamins, minerals, and protein."  Johanson recommends reaching for an apple or orange instead of a yummy candy bar that, by the way, shares the same ingredient as shoe polish: carnauba wax.

Throughout, Johanson makes it clear that for every piece of fake or junk food we eat, there is always a healthy alternative. The hard part is training ourselves to think before we eat. She encourages readers to speak out and demand healthier food choices.

Color photos are included, however, the captions are located at the bottom of the page. Text boxes that highlight a particular point are also interspersed throughout the chapters.

The book ends with some suggestions for eating "Real Food."

"There are plenty of reasons for eating real food instead of fake food. Start with good tastes and interesting textures. Try new recipes and new small restaurants. Good health feels better than being bloated or tired. Those are good reasons to make salad for lunch."

The book includes a glossary, a listing of organizations for more information, a link to the Rosen Publishing web site for updated web resources, further reading and a bibliography, and index.

Use in conjunction with Chew On This: everything you don’t want to know about fast food by Eric Schlosser and Michael Pollan’s The Omnivore’s Dilemma: the secrets behind what you eat adapted by Richie Chevat to introduce middle grade or high school student about the pitfalls of junk food. This book should also be included in a display encouraging people to eat organic or locally grown products.
Posted by nonfictiondetectives at 6:46 AM