Unraveling Freedom: the battle for democracy on the home front during World War I
Ann Bausum.
National Geographic. 2010 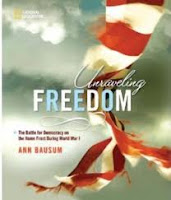 I reviewed Unraveling Freedom even though it is a 2010 publication because it is under consideration for CYBILS middle grade/young adult nonfiction.

Before I read Unraveling Freedom, I did not know that based on the 1910 census, Germany claimed the greatest number of offspring in America. Prior to WWI, the presence of so many Germans meant that German food and beverages, the German language, German-American clubs and music groups, and bilingual schools all flourished. German was the language of scientists!

Then, the Luistania was attacked by Germans at 2:10 p.m. on May 7, 1915. Because of the attack, Americans would change their attitudes from supportive to mistrust.

The US did not enter World War 1 immediately after the sinking of the Lusitania. It took almost two years, April 2, 1917, before President Woodrow Wilson called the nation to arms. When Wilson spoke to congress on that day in April, he noted that it was the “German government that was the nation’s true enemy. “We have no quarrel with the German people.”” He went on to proclaim, “They are, most of them, as true and loyal Americans as if they had never known any other fealty or allegiance.”

Bausam states that, “The sinking of the Lusitania was the 9-11 of its time, and, like 9-11, it served as a backdrop as the United States moved toward war.”

An eerie resemblance to the feelings after 9-11 can be seen in the aftermath of Wilson’s address. The President cautioned his listeners and soon “tension over who could be trusted, whether criticism of the war effort symbolized disloyalty, what it meant to be an American, and whether one could retain connections to a motherland during wartime would dominate the American home front for the rest of the decade.” (1917-1919)

Like the Patriot Act, the Espionage Act of 1917 called for, among other things, “the creation of harsh procedures for identifying and detaining spies, penalties for interfering with the war effort, censorship of the news media, and restrictions on the distribution of printed material through the US mail.” Those who spoke out against the war were put in jail. German newspapers were unable to be sent through the US mail

I could not put this book down. It was so interesting and well crafted. The similarity of that time to post 9-11 made me feel unsettled. Our society urges us to learn from our mistakes, yet here is a perfect example of how citizens allowed our government to strip us of our rights.

The book includes black and white historic photos, cartoons, and posters. There is a guide to wartime presidents (those presidents who must balance the needs for national security against the rights of individual citizens), a timeline, notes and acknowledgments, bibliography, resource guide, citations, and index.

The topic covered in this book is important for students to read and understand so that we can try to avoid it happening ever again.

Posted by nonfictiondetectives at 8:56 AM