13 Planets: the latest view of the Solar System by David A. Aguilar

13 Planets: the latest view of the Solar System 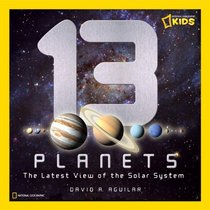 Did you know that Jupiter is so large that all the planets, including  the dwarf planets, could fit inside it? That Saturn has 62 confirmed moons? That dwarf planets Makemake and Ceres have no moons? These facts and more can be found in David Aguilar 13 Planets. Aguilar, Director of Science Information at the Harvard Smithsonian Center for Astrophysics, takes readers on a brief journey of our Solar System.  In easily understood language, Aguilar explains how astronomers are discovering new things everyday, making them “wonder just how big the universe is.” 13 Planets tells the latest scientific information about terrestrial planets (Mercury, Venus, Earth, and Mars), dwarf planets,(Ceres, Pluto, Haumea, Makemake, and Eris), the gas planets, (Jupiter, Saturn, Uranus, and Neptune), and the possible future of The Sun, and solar systems beyond The Milky Way.

Starting with the Sun, in order of their distance from it, [Mercury, Venus, Earth, Mars, Ceres, Jupiter, Saturn, Uranus, Neptune, Pluto, Haumer/Kuiper Belt, Makemake, Eris] Aguilar reacquaints readers with current information about our Solar System. Accompanying each entry is the mythology, astrology or other related facts. For example, about Earth, we are told, “Gaea, the Earth goddess of the ancient Greeks, was known as the mother of Earth. Born out of chaos, she in turn gave birth to the sky, the seas, and the land. The Romans called her Terra.”

Children will find the unusually shaped planet, Haumer, located in the Kuiper Belt, interesting. Shaped like a chicken egg, it is dubbed, “a cosmic football” “because it tumbles end over end like a football kicked for a field goal.” They will also like its analogy that if cut in half, the solid rock planet would resemble an M&M. “The outside candy coating is the ice and the chocolate found inside is the rock.”

The book closes with some heavy thoughts about the death of the sun and whether there is life on other planets. “The End of our Solar System” explains what will happen to our sun in a billion years. In 12 billion years the sun will puff into a red planetary nebula before fading away.  Aguilar hints that beyond our solar system astronomers have discovered more than a thousand planets.  He claims that soon Earthlike planets will be revealed and that within the next twenty years we may know if life exists on these “super-Earths.”

This book will appeal to children (Grades 3 – 8) who can never get enough information about space.
Posted by nonfictiondetectives at 5:25 AM