The Daytona 500: The Thrill and Thunder of the Great American Race 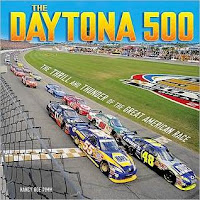 Many sports fans look forward to the Super Bowl each February, however there's another major sporting event this month: The Daytona 500. If you're in search of a nonfiction book to satisfy the race fans in your library, you'll want to check out The Daytona 500: The Thrill and Thunder of the Great American Race.

The book provides an overview of the history of stock car racing, and it all began in Daytona Beach, Florida.  In the early 1900s cars raced on beaches in Daytona and Ormond.When Bill France entered the scene in 1937, the sport changed forever. France formed the National Association for Stock Car Racing (NASCAR) and went on to build the 2.5 mile track at Daytona International Speedway. Nancy Roe Pimm describes the first Daytona 500 in 1957 which ended in a close finish between Lee Petty and Johnny Beauchamp. Beauchamp was declared the winner, but officials reversed their decision 61 hours after the race concluded after reviewing newsreel footage.

Lee Petty was declared the winner. He was awarded the trophy and a purse of $19,050. Embarrassed by the turn of events, France decided there was no way he would be put in such a difficult position again. "This is the first time so close a finish has ever occurred in auto racing," he said. "We won't be caught off guard again. We'll install a photo finish camera on the line."

The chronological format and clear writing make this an accessible book for middle grade readers. Kids will enjoy looking at the black and white photos of races from the turn of the century as well as the colorful photos from recent years. The book will appeal to NASCAR fans while introducing new vocabulary and racing rules and regulations to those unfamiliar with the sport. Facts boxes and photos capture the excitement and history of the race. Backmatter includes a glossary of racing terms, source notes and books for further reading. The Daytona 500 would make a solid purchase for a middle grade sports collection.
Posted by nonfictiondetectives at 6:00 AM

Email ThisBlogThis!Share to TwitterShare to FacebookShare to Pinterest
Labels: sports