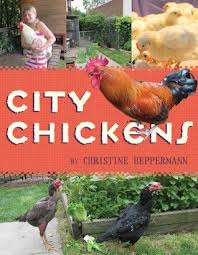 At first glance, the cover of City Chickens by Christine Heppermann, suggests a how-to book for children about raising chickens in the city.  Go any direction in my neighborhood and you will see chickens strolling about in their pens. And, why not! Fresh eggs are mighty tasty. Gosh! My best friend has chickens!

But…that’s not what City Chickens is about. Heppermann writes about Mary Britton Clouse and her husband, Bert, who live in the city of Minneapolis, Minnesota and run Chicken Run Rescue, an inner-city shelter for abused, abandoned, and mistreated chickens.

The couple works with their local animal shelter. Anytime a chicken is brought to the shelter, they call Mary. “Mary Britton Clouse falls in love every time she drives to Minneapolis Animal Control or to one of the local Humane Society shelters to pick up another guest. She gently places the scared rooster or hen into a pet carrier lined with a soft swatch cut from an old bedspread and says, “Let’s go, sweetheart. Your life is about to change.”

And change it does. Mary has a special permit that allows her to care for twenty chickens at one time. The color pictures show a cozy, yet perfect-for-chickens back yard. There is plenty of places to scratch, sample fresh insects, lay an egg or two or go about their lives of being chickens.

The sad truth is, animals in our society are often abused and mistreated for recreation and/or profit. Mary has cared for birds injured in illegal cock fighting. Some from Factory Farms, where unfortunate chickens live two or more per cage and must crawl over each other, often getting injured in the process, just to eat a bite of food. These chickens live short, miserable lives producing eggs we see in grocery stores or they become the meat in your pot. Think chicken nuggets. Mary and Bert have cared for baby chicks left by the side of the road or brought to the animal shelter after a school project. (My best friend has been given chicks after a classroom decided to hatch some eggs) In the chapter, “Dumped in a Ditch” we learn that one cold, rainy April night, someone noticed some yellow clumps by the side of the road. “Eventually somebody noticed that the clumps were moving, that they were actually baby chickens. Lots of them” Apparently, these 106 chicks had been stolen from a university lab and dumped by the side of a road. Once the chicks had been removed from their controlled environment, they were no longer useful for the lab’s experiments.

It will be obvious to readers from page one that Heppermann has a soft spot for her subject. The writing is perfect for elementary students, because even though Heppermann explains some awful situations, she never goes into graphic detail. In the author’s note, Heppermann explains she was so taken the Clouse’s that she adopted two chickens, a rooster and hen, which are now family pets.

The color photographs make this a good addition to all libraries.

Go here to visit Chicken Run Rescue's web page.
Here is a link to an interview on Minnesota Public Radio with Mary Britton Clouse.
Chicken Run Rescue is on FaceBook, too!
And, click here to watch Christine Heppermann talk about City Chickens.