Once every four years, book displays are set up to help children make sense of the presidential election. There are books that explain the voting process, books that describe the job of the President, books about Congress, and books that give a brief overview of the different presidents’ personalities and accomplishments. There are even some books about presidential pets! Today we have a joint review to share some of this year’s newest additions to the mix. 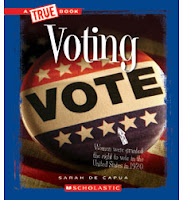 This informational text provides readers with a basic overview of the voting process. Chapter One begins with the U.S. Constitution and explains "certain groups struggled for many years for the right to vote." The struggling groups aren't identified until later in the book where a two-page spread is devoted to voting rights of African Americans, women, and Native Americans.

Voting includes numerous, colorful, recent photographs of citizens voting, working in campaign headquarters, registering to vote, and shaking hands with candidates. Middle grade readers may be interested in learning the different methods used for casting votes around the country. Chapter Three highlights touch screen computers, digital scanners, punch ballots, and the lever machines from the 1890s. The author stays away from controversies involved with some of these voting methods (no references to hanging chads).

The electoral college is explained in general terms; a map showing the number of electors in each state would be a helpful visual aid. The book ends with suggestions for how children may get involved in elections by writing letters to candidates and volunteering on political campaigns. Children who enjoy facts and trivia will be interested in the "True Statistics" in the back of the book. Did you know the first people to vote by secret ballot were Ancient Romans around 2,000 years ago? Voting is a straight-forward book about voting basics that will serve as a solid introduction for elementary school readers.

Where Do Presidents Come From?: And Other Presidential Stuff of Super Great Importance
by Michael Townsend
Dial, 2012
ISBN: 9780803737488

Comic book artist, Michael Townsend shows off his humor and artistic talents in Where Do Presidents Come From? And other presidential stuff of super-great importance. This mix of information and graphics is perfect for those readers who enjoy being entertained as they learn. The graphic format, at times, is quite busy, yet the humor and information will make this very appealing.  In six chapters Townsend covers ‘Where Do Presidents Come From?,” “Who Was the First President of the United States,” “How Does a President Get Elected?,” “Why is the White House So Awesome?,” “What Do Presidents Actually Do?,” and “What Happens When Presidents Are No Longer Presidents?.”

Similar in design to his Amazing Greek Myths of Wonder and Blunder, Where Do Presidents Come From? is packed (really packed) with tons of information. Interspersed with the factual statements are humorous panels that emphasize what is being stated. In chapter 5, “What Do Presidents Actually Do?” “For starters…To get elected President, one must first campaign long and hard, telling the American people what you believe and what you stand for…and kiss a lot of babies.” Once elected, one of the President’s duties is to be ready to use the “Nuclear Football.” What’s that, you ask? Check out page 107 to find out! " 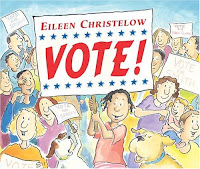 Vote! is not a 2012 title, but it is my go-to book for explaining the election process to young children. Christelow writes in  a conversational style and uses comic book illustrations (including speech bubbles and thought bubbles) to make information about voting accessible to young readers. The book follows the path of a woman running for the office of mayor. Readers learn about the election process through the eyes  the candidate's daughter and her two dogs: Elmer and Sparky.  In just 48 pages, readers are introduced to political parties, debates, constitutional amendments, campaign advertising, and recounts. The book's playful tone introduces complex concepts to children in manner they can ingest and understand.

Election! A Kid's Guide to Picking our President

Using a Q&A format, popular fiction writer Dan Gutman answers in a simple and straightforward manner some of the questions children (and some adults) may have concerning a presidential election. For example, "What is a "lame duck" presidency?" "Can anyone run for president?" "How can they predict a winner in advance?" "What is a national convention?" "Do you have to vote for your political party's candidate if you don't like that person?" and many, many more. Gutman claims that "this book may not answer every questions you may have," but it does attempt to respond to over 120 of them.

The content is broken up into six chapters: "The Presidency," "Our Government," "Candidates," "Voting," "The Election." There is no index, so children with specific questions will need to thumb through the book to find their answer. The book does include "Words you'll hear in an Election Year," a bibliography of books and web sites for more information, and a list of the Presidents of the United States.

In the author's note, Gutman states that the pronoun "he" is used throughout instead of "she," "because we haven't had a female president yet, it would have sounded more awkward to refer to the president as "she or "he/she." (Okay!) When he answers the question, "How does a voting machine work," he neglects to clarify that in many states people still use paper ballots (at least we do in Maine) Overall, a good addition.