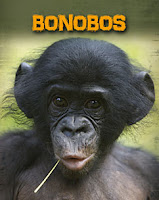 Students in need of print sources for research assignments should be sure to check out this series. Bonobos will also satisfy readers who wish to learn more about these amazing primates, and it would make an excellent fiction/nonfiction pairing with Endangered.
Posted by Cathy at 7:22 AM