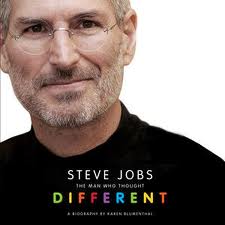 Initially, when the iPod was introduced in October 2001, it didn’t rock the world as Steven Jobs had hoped. It was definitely cool, but there was still the problem of how to get music on it. Songs had to be imported from you own CD’s. It wasn’t until the creation of the iTunes store in 2003 did the iPod take off.  In six days, iTunes sold its first million songs! How fun it is to have your whole music collection no more than three clicks away.

In Steven Jobs: the Man Who Thought Different, we learn a lot about this highly creative man who was neither an engineer nor a computer geek, but with his marketing genius and attention to details created one gotta-have-it product after another. From iMacs to iPods to iPhones, many people worldwide are in love with their Apple products.

Blumenthal bases the book on three stories Jobs told during a commencement speech given in 2005 at Stanford University. Part One is about "connecting the dots." It covers Jobs childhood, meeting Steve Wozniak, their creation of the first Apple computers and Jobs eventual removal from the company he founded. Part two is about “love and loss," those ten years Jobs was not working at Apple. We learn about his company NeXT and the development of Pixar, his marriage, children, and his explosive return to Apple. Part three covers the final years at Apple and his battle with pancreatic cancer.

Somebody told me when I was seventeen to live each day as if it were my last, and that one day I’d be right.

The book includes black & white photographs. Karen Blumenthal did a lot of research for this unauthorized biography. A critically acclaimed children's nonfiction writer and journalist for the Wall Street Journal, Blumenthal consulted books and articles written about Jobs, Apple, and his related companies and former colleagues. She also interviewed former classmates, found oral histories, looked at original financial documents for Apple and Pixar, and interviewed key journalists who covered Jobs.

The book is interesting and will offer a good introduction for those interested in Jobs. The conversational tone is upbeat and not heavily laden with tons of details that would overwhelm reluctant readers. Blumenthal keeps her focus on Jobs and his role in his companies. She includes Jobs short-comings, while always placing them into the bigger picture: his passion and drive to create a desktop computer that would be special, an amazing tool that would improve a persons life.

Curious about what was on Steven Jobs iPod? Go to page 222 of Blumenthal's book. There you will find a small listing taken from Walter Isaacson’s authorized biography: Steve Jobs. (Simon & Schuster.2011)

So, what's on your iPod? Let us know!

[Reviewed by Louise]
Posted by nonfictiondetectives at 5:00 AM