Their Skeletons Speak and Faces from the Past 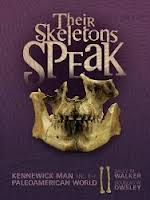 Their Skeletons Speak: Kennewick Man and the Paleoamerican World
By Sally M. Walker and Douglas W Owsley.
Carolrhoda. 2012
ISBN: 9780761374572
Grades 8 up
This reviewer obtained a copy of the book from the publisher.

The two books I review today unfold like an episode of CSI!

In July of 1996, two young men, ages 19 and 20 trying to find a good spot to watch the Tri-City Water Follies in Kennewick, Washington, accidently uncover a skull while wading in the Columbia River. Soon, the police, a homicide detective, and a paleontologist and archaeologist are on the scene to uncover the puzzling story of how those bones ended up in the Columbia River. Was it a recent homicide or bones from the past, and if so, how old were they?

Their Skeletons Speak: Kennewick Man and the Paleoamerican World by Sally M. Walker and Douglas W. Owsley is a fascinating look into our ancient past. Using the Kennewick Man, readers follow the steps taken to discover the skeleton’s past, as well as the long court battle to decide ownership. Walker is not a newcomer to writing about our past. Several of her books, including Secrets of a Civil War Submarine: Solving the Mysteries of the H. L. Huntley (2006 Sibert Winner) are a mixture of science and history.

The scientific process of dating old bones is the focus of Their Skeletons Speak, which reads like a good detective novel. We learn of the attention to detail, the pains-taking work and long hours needed to determine a skeleton’s age, sex, and place in history. For instance, certain skull features, like the cheekbones, can provide clues about a skeleton’s ancestry. In the Kennewick Man, James Chatters, a paleontologist and archaeologist, noted “the cranium’s shape did not resemble modern day European or Native American skulls he had seen.  Chatters uncovered past injuries, height, occupation, and what might have caused Kennewick Man’s death. Walker rounds out this book by including the findings of other well-known ancient skeletons -- Spirit Cave Man, Arch Lake Woman, Horn Shelter Man and Upward Sun River Mouth Child. Further enhancing the reading experience, are photos, maps, and sidebars with more detailed explanations discussed in the text. I have to admit this book was a page-turner.

Partner Their Skeletons Speak with another terrific new book, Faces from the Past: Forgotten People of North America by James M. Deem, author of the 2006 Sibert Honor Book, Bodies from the Ice. In Faces from the Past, Deem explains the history and science of facial reconstruction and believes that by putting a face to the long forgotten dead, we can at last hear their stories. 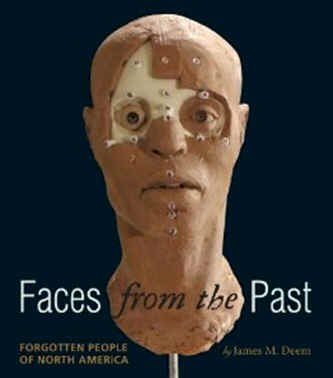 Faces From the Past: Forgotten People in North America
By James M. Deem
Houghton Mifflin. 2012
ISBN: 9780547370248
Grades 8 up
This reviewer obtained a copy of the book from the publisher.

In1940, husband and wife team, George and Sidney Wheeler, both archaeologists, are out in Nevada when they enter a cave. Wrapped up in three mats made mostly of tule, a type of reed that grew along an ancient, Lake Lahontan, which is now long gone, the couple find the skeletal remains of a man. After a brief viewing, the skeleton was wrapped up and placed in storage. Fifty-four years later, in 1994, the bones are tested using a newer techniques of radiocarbon dating. Known as Spirit Cave Man, scientists first estimated he died 1,500 to 2,000 years ago. Wrong! Spirit Cave Man died approximately 10,500 years ago, making his the oldest partially mummified human remains ever recovered in North America.

The cool thing about reading these books at the same time is that they cover similar territory and include many of the same facial reconstruction artists and scientists.

Where Walker asks the question: How did the ancient people come to North America? Deem, on the other hand, explains the history and science of facial reconstruction and how it is used to put a face to the long forgotten dead so we can know their stories.

Both books are well documented and deserve a space on all library shelves. I’m curious if teens are reading Clan of the Cave Bear by Jean M. Auel? If so, these two nonfiction titles, as well as Mysterious Bones: the story of the Kennewick Man by Katherine Kirkpatarick would greatly enhance their reading experience.