Farmer Will Allen and the Growing Table by Jacqueline Briggs Martin 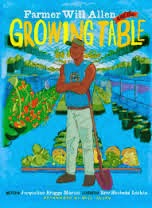 Farmer Will Allen and the Growing Table
Written by Jacqueline Briggs Martin; Illustrated by Eric-Schabazz Larkin
Readers to Eaters. 2013
ISBN: 9780983661535
Grades 1 - 4
I borrowed this book from my local public library.

There is nothing that tastes so yummy than popping a tomato, cucumber, pepper or green bean into your mouth that has just been picked from your garden.  Mmmmmm!

As more and more people strive to eat healthy as a way to combat obesity, many schools, day cares, and home gardens have sprung up. People want to eat foods grown organically, free of harmful chemicals. Throughout the United States, the local food movement is growing in popularity.

In this picture book biography, Martin writes about a remarkable man, Will Allen, who has dedicated much of his life to bringing good food to everyone, especially those who live in the cities. As a young boy growing up,
“bowls of peas, greens, and his favorite – lima beans with ham – covered the kitchen table.
"My mother often fixed enough food for thirty,” Will says. “We never had a car or TV, but we always had good food.”"
For Will, good food equaled good times.

One day, after playing professional basketball in Belgium and then while working a white-collar job in Wisconsin Will grew vegetables on land owned by his wife's family. But Will wanted his own farm. How could someone farm in the middle of a city?  Will Allen found a way. He purchased six empty greenhouses that stood on a plot of land “the size of a large supermarket.”

The narrative uses simple and direct language to tell Allen’s story. The illustrations are done in ink and pen, and markers to make an image or color, and then digitally matches with scanned textures and objects. They resemble primitive folk art style. Back matter includes an afterword from Allen, author’s note, and further reading.

Click here to watch a movie about Will Allen and Growing Power.

Books written for a younger audience should still be shared with older students, especially when they are about individuals who have a vision, stand up for what they believe, and working to make the world a better place. Partner Farmer Will Allen and the Growing Table with Gaia Warriors by Nicola Davies, Potatoes on Rooftops by Hadley Dyer, and It’s Our Garden by George Ancona