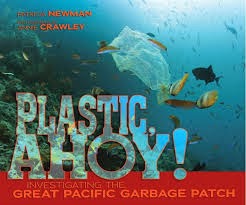 Written by Patricia Newman; Photographs by Annie Crawley
Millbrook Press. 2014
Grades 4 thru high school
I received a copy of this book from the publisher.

Located in the Pacific Ocean, 1,000 miles out to sea between San Francisco and Japan is the North Pacific Central Gyre, which covers an area three times bigger than the United States. Floating within this “oceanic desert” is the largest accumulation of trash, mostly plastic in the world. This massive accumulation of plastic which is pushed together by ocean currents is called the Great Pacific Garbage Patch and scientists estimate the size is two times bigger than the state of Texas. It was first discovered in 1997 by racing boat captain, Charles Moore,
He found abandoned fishing nets, plastic bottles, bottle caps, toothbrushes, containers, boxes, and tiny pieces of plastic. The litter came from rivers and streams, from people visiting the beach or riding on ships who did not properly dispose of their plastic.
All this plastic presents hazards not only to marine life, but also the fishing and tourist industry. According to Greenpeace, of the more than 200 billion pounds of plastic the world produces each year, about 10 percent ends up in the ocean.

In Plastic, Ahoy! author Patricia Newman tags along with three scientists, Miriam Goldstein, Chelsea Rochman, and Darcy Taniguchi as they travel more than 1,000 miles into open water, off the coast of California to investigate the Great Pacific Garbage Patch. For three weeks, as part of the Scripps Environmental Accumulation of Plastics Expedition (SEAPLEX), they will conduct tests to try and answer some big questions: How much plastic is in the Great Pacific Garbage Patch? Are fish eating the plastic? Are the chemicals used to make plastics poisoning the water? Are any animals and plants living on the floating plastic? The process to find the answers to these questions and more make for exciting reading.

Complementing the easy to understand text are stunning photos snapped by professional underwater photographer and filmmaker, Annie Crawley. The pictures are well captioned and capture how intertwined plastics have become with marine life. Their students uncovered a sobering fact: The open ocean is no longer a wild place untouched by humans. At 1,000 miles (1,600 km) from land, SEAPLEX scientists saw evidence of human pollution in almost every net tow. Miriam found that a single piece of plastic is home to several flying fish eggs. Mussels, crabs, and sea anemones live on one piece of discarded rope.

Earth Day is right around the corner (April 22). Include Plastic, Ahoy! in any display about the environment, oceans, and pair it with Tracking Trash by Loree Griffin Burns, another excellent book about disturbing effects of trash in our oceans.

After reading Plastic, Ahoy! I wonder why we can’t scoop up all that plastic in the Great Pacific Garbage Patch and take it to a recycling center.