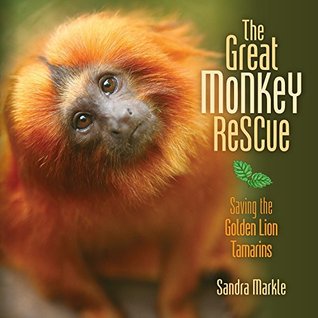 Over the past few years we've reviewed  The Case of the Vanishing Golden Frogs and The Case of the Vanishing Little Brown Bats by Sandra Markle. These titles have proven to be high interest books for students in my school because Markle presents the information in the form of a mystery that needs to be solved. Markle's latest nonfiction book for middle grade readers isn't a mystery, instead the story is structured in the form of a problem and solution.

The Great Monkey Rescue describes the plight of the endangered golden lion tamarins in the Brazilian rain forest. The engaging narrative is perfect for upper elementary readers in grades 3-5. Markle describes how the number of golden lion tamarins dwindled to 200 in the 1960s due to deforestation. Tamarins live in the canopy of the forest and travel across the high branches on the trees. When the forest was cleared for cattle pastures and roads, tamarins lost their homes. Map on pages 10-11 outlines the Atlantic Forest in Brazil for readers. Large, colorful photos of tamarins in their natural habitat are effectively placed throughout the book. Captions are chock full of additional information about tamarins.

The book highlights how scientists tried breeding golden lion tamarins in zoos, but when the tamarins were released into the wild they didn't survive. They ate poison fruit and made their homes near colonies of Africanized bees. Eventually scientists had success with integrating tamarins bred in captivity with tamarins born in the wild. As the population of golden lion tamarins increased, their need for forests increased as well. One problem was that small forested areas that were left were like islands surrounded by pastures. The solution was to reforest the area by planting trees that could serve as a bridge between the forests. This would allow the tamarins to walk along the tops of the tress to access another forest. The story ends on a happy note as the population of golden lion tamarins has increased to 3,200.

The Great Monkey Rescue is a well-designed, accessible science book that will encourage readers to think like scientists and find solutions to environmental problems. Back matter includes an author's note, glossary, timeline, and list of additional resources. Readers who are inspired to take action and help the golden lion tamarins may want to check out Save the Golden Lion Tamarins.
http://savetheliontamarin.org

Click here to preview the book on the publisher's site.
Posted by Cathy at 2:00 AM