The Case of the Vanishing Little Brown Bats 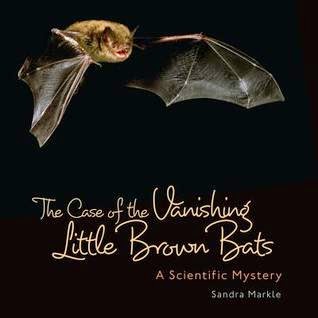 The book is organized in a question & answer format will will keep readers engaged.  Markle poses various questions then shows how scientists tested each theory.

"Could climate change be the problem?"
"Could pesticides be the killer?"

As each question is answered, readers learn about the physical features of bats, their habitats, and the importance of bats to the ecosystem.

Photographs throughout the book show scientists at work in labs, observing bats in caves, downloading data from computers, and swabbing bats to test for bacteria and fungus. The length of the book, layout of the pages, size of the print, and writing style make this an ideal book for middle grade readers who are not quite ready to tackle the more complex Scientist in the Field series.

The Case of the Vanishing Little Brown Bats could serve as an excellent, nonfiction read aloud for grades four and up. Not only does the book encourage kids to see problems through the eyes of scientists, but it also will motivate readers to protect bats in their own backyard.

Back matter includes an author's note, glossary, tips for helping bats, and a list of global efforts to protect bats.

Visit the Lerner Publishing site to look inside the book.

Read Sandra Markle's blog post about bats.
Posted by Cathy at 2:00 AM