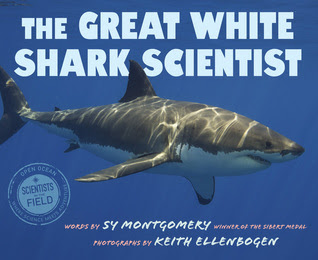 It's Shark Week on the Discovery Channel, and it's the perfect time to review the latest Scientists in the Field book, The Great White Shark Scientist. Author, Sy Montgomery, and photographer, Keith Ellenbogen, have teamed up on another exciting marine biology story for kids. (Last summer the duo brought us The Octopus Scientists.)

The Shark Scientist features Dr. Greg Skomal, a biologist studying great white sharks in Chatham, MA (not far from where the setting of Jaws). Organized chronologically by day, the book follows the work of Skomal and his crew one summer as they tag sharks off the coast of Cape Cod. In her signature narrative style, Montgomery eloquently blends dialogue, description and facts to paint a vivid picture for readers.

"Look at those rocks!" says Keith, marveling at what looks like hundreds of dark boulders on the beach.

"Those aren't rocks," says Greg."Those are seals- lots of seals!" Cynthia, Jeff and Pam set to counting them. It looks like there are 250 just in this one group. "The sharks eat everything," explains Greg, "but it's these seals that's drawing them to the Cape." (p. 5)

Ellenbogen's impressive photographs capture sharks underwater, divers in submersible cages, and Skomal on his boat tagging sharks. Readers will take a way a new appreciation of sharks and an understanding of why humans need to save them. The Great White Shark Scientist is a recommended purchase for schools and libraries. It would make an exciting and informative nonfiction read aloud for grades 4 and up.