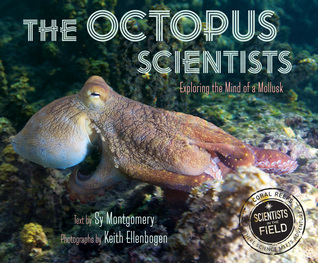 The Octopus Scientists: Exploring the Mind of a Mollusk
(Scientists in the Field series)
by Sy Montgomery
photographs by Keith Ellenbogen
Houghton Mifflin Harcourt, 2015
ISBN: 978-0-544-232709
Grades 5 and up

Sy Montgomery has a gift for crafting nonfiction texts that transport readers into the world of scientists on location. In The Octopus Scientists, Montgomery brings readers on location to the island of Moorea near Tahiti in the South Pacific.

Montomgery and underwater photographer, Keith Ellenbogen, joined a team of scientists from around the world as they looked for the Pacific day octopus. Even though the octopus is not rare, it's difficult to see one in its natural habitat because it can squeeze into small places and can change colors to blend in with its surroundings. The octopus has a large brain for a mollusk, and Jennifer Mather, lead scientist for the project, hopes to learn more about how octopuses use their brains to solve problems and make decisions.

Readers meet the four octopus scientists in the first chapter of the book. The photographs and brief biographies of each scientist will help readers keep track of each scientist during the narrative. Montgomery builds excitement, suspense, and a sense of adventure through the first person narrative, dialogue and vivid descriptions of what it's like to spend days diving and searching for the elusive octopus.

"We are always at risk of puncture by the poisonous spines of sea urchins or the deadly and nearly invisible sand-colored stonefish. We're constantly scraping fingers, knees and bellies on the sharp skeletons of dead corals that poke up from the bottom. The ropes of our buoy markers and collection buckets and the lines holding our pencils to our dive slates tangle on the dead coral and one another." (p. 28)

Readers get a sense of the persistence and patience it takes to be a scientist when the group doesn't spot an octopus after two days of diving.

"I was beginning to wonder how anyone could ever find octopuses anywhere. The octopus specializes in looking like anything but itself. It squeezes itself into a den so tight you might never see it there, hides or rests most of the time, and moves dens frequently. How do you find a hiding, invisible creature in place you've never been to before?" (p. 16-17)

On the third day they spot an octopus. They continue to explore several different diving sites over two weeks. Ellenbogen's underwater photographs of octopuses and other marine life are visually stunning. Readers will be surprised to see octopuses in so many different colors, sizes and shapes. By the end of the trip, the scientists located eighteen octopuses. Montgomery explains that even though the scientists were not able to answer all of their questions, they made some significant discoveries. For example, the octopuses in Mororea had different feeding patterns and stayed in their dens for shorter periods that octopuses they studied in Hawaii.

The Octopus Scientists is a recommended purchase for school and public library. It would make an excellent mentor text for a writing class working on first person narratives, and it would be an exciting read aloud in a middle school science class.

Be sure to check out the Activity and Discussion Guide for The Octopus Scientists.
Posted by Cathy at 10:53 AM