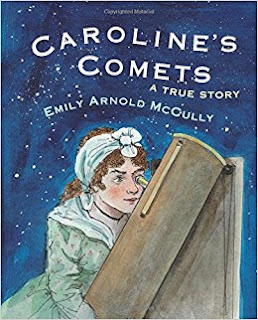 Caroline’s Comets: a True Story
Written and illustrated by Emily Arnold McCully
Holiday House. 2017
ISBN: 9780823436644
Grades 2-5
To write this review, I borrowed this book from my local public library.

Note: Louise is happily writing reviews while Cathy is on Sabbatical. She returns February 2018.
Discovering one comet is pretty exciting, but to find seven more is totally remarkable. McCully’s informational picture book biography tells the story of Caroline Herschel, the first woman to discover a comet and the first woman to be paid for scientific research,

Born in 1786 in Hanover, Germany, Caroline was the only girl in a family where her father and brother were royal musicians. With a mother who felt Caroline’s role was the family housekeeper, once she was taught to knit, she said,  “From that day forward, I was fully employed in providing my brothers with stockings.”

Things became more dismal for Caroline when, at age ten, she caught typhus and then smallpox. “The first stunted her growth, and the second scarred her face. Her father worried that no man would marry her. How would she live without a husband to support her?”

Though her housekeeping skills were always in demand, Caroline eventually became an assistant inventor when William, one of her brothers, decided to build a telescope, better than any that already existed. By 1787, Caroline would be paid for her services by King George III. In her author’s note, McCully says of the Herschels: They were true collaborators.”

A solid addition for collections about women and science.
Posted by nonfictiondetectives at 6:00 AM