Trudy’s Big Swim: How Gertrude Ederle Swam the English Channel and Took the World by Storm By Sue Macy 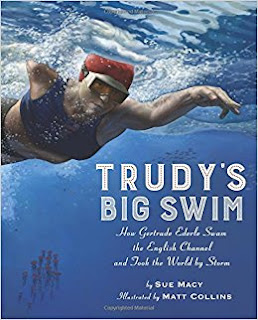 
To write this review, I borrowed this book from my local public library.

Note: Louise is soldiering on while Cathy is on Sabbatical. She will return February, 2018.

On a beach in France, at 7:09 on the morning of August, 1926, twenty-year-old Gertrude Ederle waded into the surf. Her goal? To be the first woman to swim the English Channel.  Already an accomplished swimmer, a New York Times headline called Trudy, “the greatest free style swimmer of her sex ever developed.”  With a distance of 21 miles, it would take the long-distance swimmer 14 hours; 39 minutes to set a world’s record. “Not only was Gertrude the first woman to complete the swim; she also beat the record of the fastest man by close to two hours.”

A shy person who became overwhelmed by her sudden fame, Ederle also suffered from hearing loss from a bout with measles as a child. She became totally deaf by age 22. Ederle died on November 30, 2003 at age 98.

A very exciting reading experience for eyes and ears. Perfect to share in the classroom or snuggled up on a couch.

Interesting to note. Macy states in her author’s note that many books will say Trudy was born in 1906, that she was only 19 when she was English Channel.”  Actually, checking Ederle’s gravestone, Macy confirms Trudy's birth day was really October 23, 1905.  That means she was 20 when she set the world's record in 1926.