The Faithful Spy: Dietrich Bonhoeffer and the Plot To Kill Hitler by John Hendrix 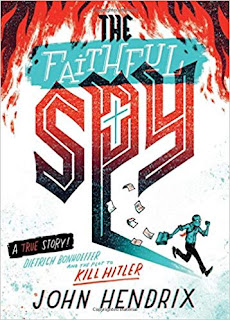 The Faithful Spy: Dietrich Bonhoeffer and the Plot To Kill Hitler.
Written and Illustrated by John Hendrix
Abrams. 2018

“Faith, without action, is not faith at all.
Love, without sacrifice, is no love at all.”

On April 9, 1945, just two weeks before allied forces liberated the camp, Dietrich Bonhoeffer, a German pastor, is killed by hanging at Flossenburg Concentration Camp. Why? Bonhoeffer  had joined the resistance against Adolf Hitler. He worked as a spy and participated in multiple assassination attempts against Der Fuhrer.

This is a powerful story of resistance. Hendrix shares the true story of Dietrich Bonhoeffer and how he grew emotionally to see that the ultimate sacrifice was to risk his life in order to stand up for what he believed; to save the German people from the tyrannical maniac, Adolf Hitler.

Dietrich Bonhoeffer, one of eight brothers and sisters, was born February 6, 1906 in Breslau, Germany (now Wroclaw, Poland). Having grown up during World War I, (he lost an older brother in that war), at age fourteen, in 1920, Bonhoeffer declared he was a theologian.

In 1930, he travels to America. While there, Bonhoeffer sees first-hand the injustices aimed at African Americans. The unfounded hatred, racism, and segregation that was dividing the country. When he attends a sermon given by Dr. Adam Clayton Powell, Bonhoeffer's faith would be challenged. “This pastor encouraged - no, demanded - that the congregation’s faith in God be put in opposition to the world’s evils. The people of God must be the first through the breach when fighting racism and injustice.”

By 1933, as Hitler worked to bring every part of German life under his control, even the German churches.  “He convinced leaders of churches that he should be the head of state and the German church.  He created Reich Church, the official church of the Nazi Party. The great Cathedrals of Germany were adorned with the swastika, a broken cross.”

Bonhoeffer’s theology would be transformed from thought into action, the creation of something he called, ‘Civil Courage.”

The book’s design is done by including the handwritten text on full pages of art. The illustrations were created with hand drawn pencil and custom digital brushes. Colored digitally, the book is printed in black, Patone 3262U, and Pantone Red 032U spots color.

In this illustrated biography of a very brave individual, Hendrix includes a clear understanding of events that led to Hitler’s assent to power, how the German people were seduced by the promise of economic stability. With the growing atrocities, they were too frightened to stand up and stop the madness.

Back matter includes an author’s note, an explanation on research and authenticity, a selected bibliography, and source notes for quotes woven into the narrative.

The publisher sent me a copy of this book that was used to write this review.
Posted by Louise at 6:00 AM