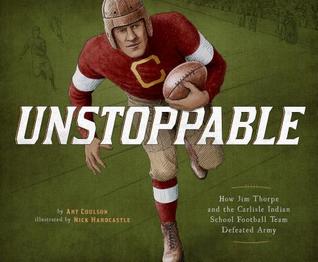 Unstoppable is an inspiring picture book biography about one of the best athletes of the 20th century. Young readers will be amazed by the talent of football and track & field legend, Jim Thorpe. Before describing Thorpe's athletic accomplishments, the author provides readers with background information about the Carlisle Indian Industrial School and how Native children were taken from their families and forced to learn trades and give up their language and traditions. Coulson effectively writes about a serious topic in a manner that is appropriate for elementary readers.

While he was a student at Carlisle, Thorpe was introduced to the coach Pop Warner. With coaching from Warner, Thorpe went on to win a gold medal at the Olympics in Pentathlon, and he led the Carlisle football team to victory over West Point. Realistic-style watercolor illustrations with pen and ink lines work well with the story. Back matter includes additional information about Thorpe, Warner and the Carlisle School including some harsh truths. Warner was fired from Carlisle due to abusive treatment of his players, and hundreds of children at Carlisle died from malnourishment and mistreatment. Coulson effectively captures the excitement and significance of the football game between Carlisle and Army while also describing the government's cruel and inhumane treatment of Native children