Her Fearless Run by Kim Chaffee 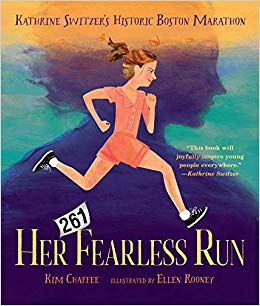 In 1967, women did not run in marathons. Men thought women were not strong enough. “Women weren’t supposed to sweat,” and running for 26.2 miles would cause serious injury. In Her Fearless Run, Chaffee tells the exciting story of Kathrine Switzer and her courage to challenge the status quo to become the first woman to register, run, and finish, the Boston marathon. (She was disqualified when the officials realized she was a women)

The narrative is exciting as we read how Kathrine loved running at a young age. To her, it was magic. In college, her ability to run longer distances got her an invitation to join the men’s track team. “The team needed more runners, and Kathrine was eager to join.”  When she began classes at Syracuse University, she could train with the men, just not compete in races. The more Kathrine heard about the Boston Marathon, the more she wanted run in it.

Back matter includes an author’s note and bibliography. Also included is a brief explanation on how five years after Kathrine’s run, in 1972, women where officially allowed to run the Boston Marathon. 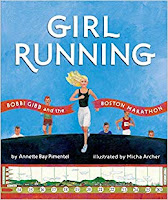 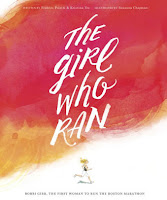