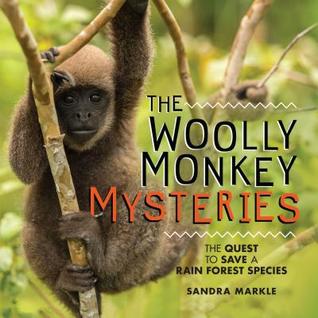 The Woolly Monkey Mysteries: The Quest to Save a Rain Forest Species
by Sandra Markle
Millbrook Press, 2019
Grades 3-6

Sandra Markle takes readers deep in the rainforests of Peru where the woolly monkeys make their homes. The elusive woolly monkeys act as gardeners in the rain forest where they eat fruit and spread seeds in their waste along the floor of the forest.

The book focuses on the work of scientists studying the impact of woolly monkeys on the rainforest as well as the effects of deforestation on the monkeys.

Scientist Andrew Whitmorth started a project using camera traps, cameras with infrared sensors, to observe the woolly monkeys. Whitmorth and his team use harnesses and gear to climb high into the rainforest canopy to install the camera traps. The layout of the book is a strength. A combination of photographs, diagrams and maps provide readers with information about the woolly monkeys, the rainforest and the work of scientists. Text is accessible and is chunked into sections for to elementary readers. The back matter encourages readers to become "science detectives" by going into nature to observe squirrels in trees.

Other science mystery books by Markle include:
Snowy Owl Invasion
The Search for Olinguito
The Case of the Vanishing Little Brown Bats