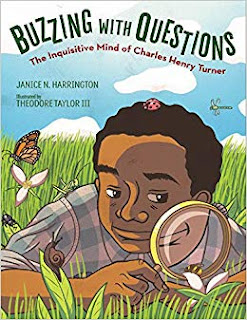 Have you heard of Charles Henry Turner? Neither had Janice N. Harrington. In this well-researched picture book biography, she does an excellent job introducing to readers the pathbreaking African American scientist, Charles Henry Turner (1867-1923).

Born in Cincinnati, Ohio, Charles Henry Turner’s mind buzzed with questions about plants, animals, and bugs. Though his home was full of books, there never seemed to be enough to answer all his questions. “Charles Henry Turner asked so many questions that his teachers urged him to “go and find out.” And Charles did.”

Charles continued to read and find out. He worked hard. Graduated from high school and even though most colleges did not accept African American students, Charles went to college.

He studied spiders, tiny crustaceans, and, my favorite, ants. When Charles Henry Turner received a Masters of Science degree from University of Cincinnati, the first African American to receive a graduate degree from that university. He becomes a biology teacher at Sumner High School in St. Louis, Missouri and taught until his retirement in 1922.

In 1910, Charles Henry Turner is the first African American scientist admitted to the St. Louis Academy of Science.

Charles Henry Turner believed that biology could help people see the connection among all living things. Biology helps us to see - “to look at the world more closely. To think less about ourselves and more about others." Harrington says, “In these times when so many animals, insects, and plants are endangered or disappearing, what could  be more vital a gift? Like Charles Henry Turner, look at the world. Ask questions. Search for new answers.

I received a copy of this book from the publisher to write this review.