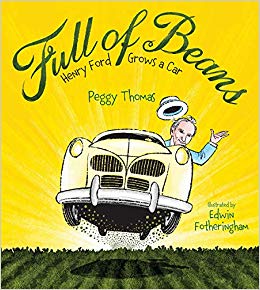 Full of Beans: Henry Ford Grows a Car
Written by Peggy Thomas; Illustrated by Edwin Fotheringham
Calkins Creek. An imprint of Highlights. 2019
Grade 2 and up

In 1932, the United States was in the Great Depression. Farmers were losing their farms, crops were rotting in the fields with no one able to afford to buy them. To help the farmers, Henry Ford, the man who invented the car that changed how we travel, came up with the idea of experimenting with soybeans to see what exactly could be made from the oil of this ancient bean. One of his scientists, Robert Boyer, discovered many uses for the soybean.
Boyer also discovered that the soybean, dried and ground made flour. Mmmmm! Model T crackers were tasty, as was the soy ice cream served in the Ford Motor Company lunchroom.

But Henry wanted a car made entirely from soybeans. “Henry Ford saw this as the perfect symbol for how farms could fuel factories.”

“On August 13, 1941, everyone gathered for the Dearborn (Michigan) Day Festivities. Dressed in his soybean suit, Henry road to the fairgrounds in his sleek new automobile (made from soybean plastic) painted the color of a wax bean. Some folks joked that the car ran on salad dressing rather than gas.”

Some saw Henry’s invention as a revolutionary idea.

This informational picture book biography, focuses on another side of Henry Ford: that of an innovative inventor. Fotheringham’s digitally created art is lively, colorful, and mirrors the text.

Back matter includes author’s note, more information on soybeans, a recipe for Model T crackers, a timeline, source notes for quotations, books and articles, plus some fascinating information on how the Ford Motor Company still uses soybeans today in their cars.

I wrote this review using a copy of the book sent to be by the publisher.
Posted by Louise at 5:00 AM