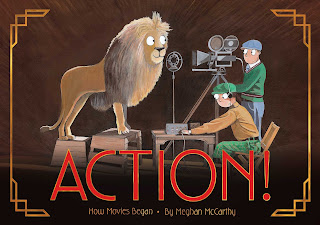 In Action!, McCarthy, explains in this fun nonfiction picture book, how we went from taking photos that required a long exposure time to our fast-paced, action-packed movies.

McCarthy’s engaging narrative show the main inventions that would allow movies to be made. We see how each invention built upon itself. From stop-action movies, silent films to movies that incorporate all kinds of sounds that creates an atmospheric experience for movie watchers. Think 3-D movies.

We also learn how movies from the 1920’s still influence filmmakers today.

For example, in 1917, comedian Roscoe “Fatty” Arbuckle, in his movie, The Rough House, sticks forks into two dinner rolls and makes them dance. Charlie Chaplin does the same thing in his movie, The Gold Rush in 1925. Johnny Depp, in Benny & Joon, 1993, has his own rendition.

Also placed into perspective was the prejudices towards African Americans during the Twenties when Josephine Baker left America to have more freedom to become a star in Paris. Baker paved the way for other African American actors to be movie stars today. “In 2018, a Marvel movie, The Blank Panther, with a majority black cast was a smash hit!”

An Author’s Note and more in-depth back matter on aspects discussed in throughout the book, and a selected bibliography, is included.

Highly recommended for all ages, especially those who love movies.