Numb to This: Memoir of a Mass Shooting by Kindra Neely 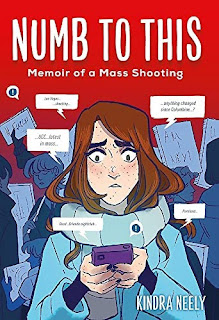 Numb To This: Memoir of a Mass Shooting
Kindra Neely
Little, Brown and Company. 2022

Graphic artist, Kindra Neely, is a survivor of the mass shooting at Umpqua Community College in Roseburg, Oregon in October 2015. Her memoir, told in graphic novel format, tells the story of the shooting, and her journey to try and heal from this trauma. Making this ordeal extra challenging is the continued steady stream of mass shootings throughout the United States.

Neely was no stranger to the negative influence of guns. Living in Texas, her school had metal detectors, police dogs, and officiers. “There were a lot of guns. Everybody carried in Texas.” After a drive-by shooting a few houses from where she lived, Neely’s mother had enough. She packed then 13-year-old Kindra into the car and they relocated to her mother’s hometown: Roseburg, Oregon.

Life improved a lot! Kindra felt safe in her new surroundings. She made friends. The calmness of Oregon allowed Kindra to have the space to find herself and figure out exactly what that meant for her future.

“Gun violence wasn’t something I was accustomed to. It just wasn’t expected.” Not here in Oregon.

Then, on her fourth day attending Umpqua Community College, a gunman opens fire on campus. Nine people killed and eight people injured. Even before she arrived home that awful day, a national newspaper posts a picture of Kindra and a friend hugging. “I felt so violated. People were going to make their own assumptions about the people in the photo without ever knowing how we actually felt or what it was like. The nation was watching us while were were most vulnerable, but it felt like we were entertainment.”

The trauma of that day never leaves Kindra. Even when she attends art school in Georgia, the events of that day haunt her. She copes, yet suffers panic attacks. With more and more mass shootings happening, and seeing a video posted by the NRA on how to spin school shootings to their advantage, Kindra finally makes up her mind. It was time to tell the story of mass shootings from the point of view of those who were there.

This is a powerful memoir. Neely went from feeling pointless - someone without feelings - to feeling hopeless - to acknowledging there is a loss with something there to believe in.

Included is an author’s note and a list of resources.

Read an Interview with Neely on NPR