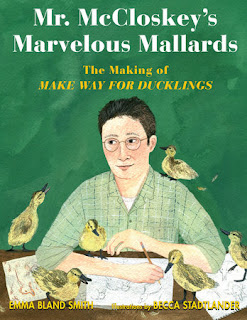 Mr. McCloskey's Marvelous Mallards: the Making of Make Way For Ducklings
By Emma Bland Smith;
Illustrations by Becca Stadtlander
Calkins Creek. An Imprint of Astra Books for Young Readers. 2022
Make Way for Ducklings received a 'starred' review from Kirkus in 1941 and went on to win the prestigious Randolph Caldecott Medal in 1942. What made the book so special? The illustrations.
Bland shares the story of just how McCloskey, a perfectionist when it came to his art, spent six years trying to get the story just right. The idea of Mr. and Mrs. Mallard looking for a safe place to raise their ducklings was captivating. But, what could he do to make the ducks on the page good enough?
What else was there to do but draw from real life? And how would he do that? By keep real live ducklings for months in his New York City apartment.
"You can't draw ducks unless you live with them." Robert McCloskey
The story celebrates the commitment McCloskey had to making his beloved story, a favorite for generations.
The book includes a word from Jane McCloskey (Robert's daughter), and author's note, a explanation on who was May Massee (McCloskey's editor at Viking Press), a list of book written and illustrated by McCloskey, a bibliography, and a timeline of important dates in the life and career of Robert McCloskey.
A fun book to hand to parents, both those who grew up hearing the story and to those who will read Make Way For Ducklings for the first time.
Posted by Louise at 5:00 AM