She Sang for India 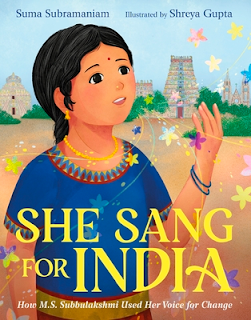 She Sang for India: How M.S. Subbulakshmi Used Her Voice for Change
by Suma Subramaniam
illustrated by Shreya Gupta
Farrar Straus Giroux, 2022

Young readers will find inspiration from the story of M.S. Subbulakshmi in the picture book biography, She Sang for India.
Kunjamma had a gift for singing from an early age, but the traditions of early 20th century India prevented her from singing in public.
After singing at school, Kunjamma was offered a recording deal and soon became known as Madurai Shanmukhavadivu Subbulakshmi. Author Suma Subramaniam traces the rise of Subbulakshmi as a singer and activist in an engaging expository style. The story has references to songs in Hindi, Tamil and Sanskrit.
Shreya Gupta's gorgeous illustrations are at times colorful and bold when Subbalakshmi is on stage singing or performing at festivals. The palette shifts to darker colors for serious events such as the partition of India and Pakistan divide and the assassination of Gandhi.
The book ends on an uplifting note when Subbulakshmi was invited to sing at the United Nations. As the first singer from India to perform for the U.N., Subbulakshmi spread her message of peace for the world. A timeline in the back matter will help children place the events in time.
Posted by Cathy at 5:00 AM