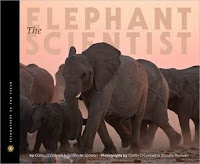 The Elephant Scientist focuses on the work of Dr. Caitlyn O’Connell, who has studied elephant communication for the last nineteen years. O’Connell authored the adult book, The Elephant’s Secret Sense: the hidden life of the wild herds of Africa. (2007)

Always interested in studying large mammals, in 1992 Caitlyn O’Connell and her now husband Timothy Rodwell were offered a chance of a lifetime by the Namibian Ministry of Environment and Tourism: to study elephant movements, habitat, behavior, and their interaction with people for three years.

“It involved working in the Caprivi, an area in northeastern Namibia and one of the last places where elephants still migrate hundreds of miles during the wet, or rainy, season.”

It was also a place where elephants clashed with humans, especially farmers. The two must share land and access to water in a space that has no fences between national parks and farms.

Caitlyn’s assignment “was to look for ways to keep elephants from eating farmers’ crops.”

In the process of trying to find a humane way of keeping elephants out of the cornfield, O’Connell made a major discovery: Elephants send and receive messages with other elephant family groups through the ground with their feet!  Through more research, O’Connell learned:

“Elephants can detect ground vibrations and can also discriminate subtle differences between these vibrations through their feet.  That is, they can tell whether calls in the wild come from trusted friends – such as other family members – or from strangers.”

The Scientists in the Field series introduces readers to interesting people who work in the exciting, and often challenging, natural world. (The Hive Detectives, Extreme Scientists, Emi and the Rhino Scientist) The series successfully conveys scientific information in a style that is informative, yet easy to understand. Paired with eye-popping photographs, they are a hit with a wide range of students.

As par for the series, the book includes a table of contents, bibliography, glossary, source notes, and index.

Place this book in a display with Small as an Elephant by Jennifer Richard Jacobson or A Million Shades of Gray by Cynthia Kadohata.

Don't miss another title in this fine series: The Manatee Scientists: Saving Vulnerable Species by Peter Lourie. ISBN 9780547152547
Posted by nonfictiondetectives at 9:25 AM