The Many Faces of George Washington: Remaking a Presidential Icon 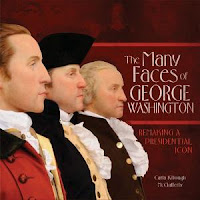 The Many Faces of George Washington: Remaking a Presidential Icon
by Carla Killough McClafferty
Carolrhoda Books (a division of Lerner Publishing) 2011
ISBN: 9780761356080
The reviewer obtained a copy of the book from the Southern Maine Library District's Examination Collection.

Every time you pull a dollar bill out of your wallet you see the image of our country's first president. The picture of George Washington printed on the dollar is based on a 1796 portrait by Gilbert Stewart. Because of this famous portrait, most Americans think that Washington was stoic, serious, even grumpy. Historians at Mount Vernon's Donald W. Reynolds Museum and Education Center hoped to counter those images by undertaking a huge project to educate visitors about the "real" George Washington. The Many Faces of George Washington follows the work of forensic anthropologists and artists hired by Mount Vernon in 2005 to create three life-size models of Washington.

McClafferty's book alternates between the Mount Vernon project and historical accounts of Washington's life. There is something for everyone in this book. History buffs will enjoy learning about how historians and artists used articles of clothing, sculptures and portraits to piece together what Washington looked like. Science enthusiasts will be captivated by the team's use of 3D technology and computer scans of sculptures to create a scale model of the president.

Readers will be intrigued by the photographs of the project during its various stages. One series of photographs that really stand outs shows three different sets of dentures that Washington wore. The dentures were made from horse, cow and human teeth as well as hippopotamus ivory. Despite popular belief, the dentures were not made of wood.  Scientists measured the dentures to help them to accurately recreate Washington's jaw bone.

After scanning sculptures and measuring Washington's dentures, scientists made foam models of the president's head. The foam models were then used to create a plastic likeness and finally clay sculptures of Washington at ages ninteen, forty-five, and fifty-seven (his age when he took the oath of office). Artists, tailors and historians were brought in to make wigs, design authentic clothing, and create Washington's hands. Artists painted Washington's face and captured the vibrancy and dignity of the man.

Throughout the book McClafferty uses primary documents, quotes and historical accounts to provide readers with a glimpse into Washington's life as a surveyor, soldier and politician. The author's clear and organized style makes history accessible to middle grade and young adult readers.

A timeline of important events in Washington's life is included at the end of the book. It's evident that McClafferty researched the topic thoroughly; an extensive list of source notes and a lengthy bibliography are located on the last pages. A list of discussion questions related to the book can be found on Lerner's eSource Web site.

Readers who are interested in science and history will want to pick up The Many Faces of George Washington for pleasure reading. The book would also make an interesting read aloud for an upper elementary or middle school history class.

Posted by nonfictiondetectives at 9:21 AM